CONFIDENTIAL: THE ENQUIRER OF THE 1950s 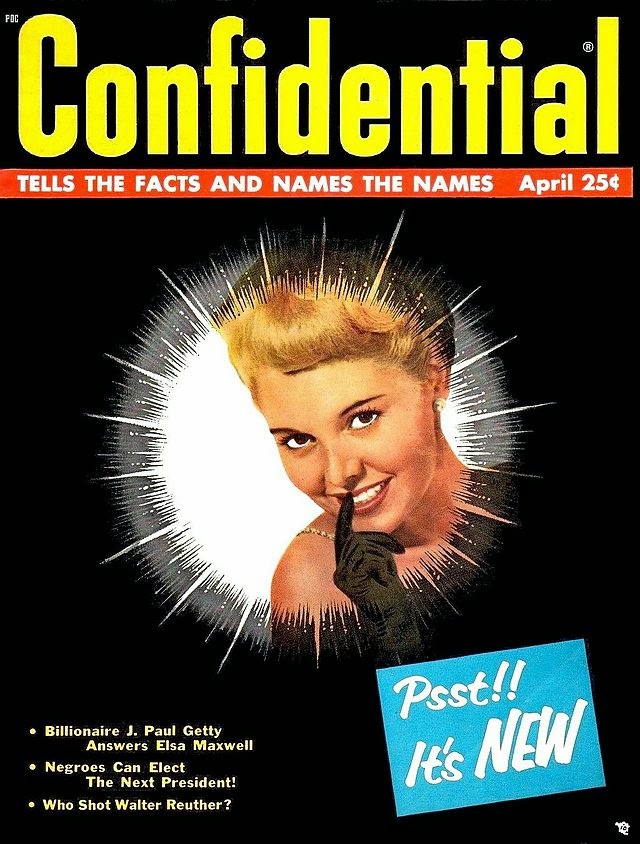 In 1952, the movie industry was in a sharp decline.

"Nobody knew what to do," says journalist Henry Scott. "Revenues had fallen sharply, Americans were watching TV and going bowling — so that alarmed execs. And the specter of anti-communist investigations ... hadn't gone away."

The same year, "girlie magazine" publisher Robert Harrison decided to launch a gossip rag all about Hollywood celebrities called Confidential. The subhead of Confidential — "names the names" — is exactly what the magazine did: It called out celebrities who were in the closet, in rehab or having marital problems.

"They were sleazy and accurate," says Scott, who details the ups and downs of Confidential in his new book, Shocking True Story. "They also printed a little less than they knew — they might not choose to mention that the woman [in an affair] was 14. If the man said, 'We'll sue,' they said, 'We'll mention she was a minor.' "

Confidential specialized in spreading gossip about huge Hollywood stars — and making sure the facts were right. When Desi Arnaz and Lucille Ball were on the cover of Life magazine, for example, Confidential ran a cover story saying Arnaz had an affair with a prostitute. (Which was true, but it had happened years earlier.)

The magazine also used innuendo to talk about celebrities indirectly.

"When they wrote about Lizabeth Scott," says Henry Scott (no relation), "they didn't say she was a lesbian. They said she preferred the company of babes."

Confidential alluded to the sexuality of a number of celebrities, among them Tab Hunter — and hired a former Los Angeles cop named Fred Otash to wire Rock Hudson's home.

"Otash had access to conversations where [Hudson] confesses to having sex with a man and talked at length about his life," says Scott. "The studios prevailed on Confidential not to write it, and said they'd give them a story of Rory Calhoun instead. Calhoun was a small-time criminal, and [Confidential] wrote a story about his secret criminal life. But instead of hurting him, [the story] made [Calhoun] into a tough guy."

Other Confidential headlines include a dinner party where Robert Mitchum removed all of his clothes — and an incident involving a broken door, a hotel room, Joe DiMaggio, Marilyn Monroe and Frank Sinatra.

"In the '40s and '50s, we had public lives and private lives," Scott explains. "The way we looked at the world was influenced by movie theaters. Movie theaters say gays didn't exist and that cheaters would be punished. There were very rigid, unrealistic codes that movies projected. So [Confidential] helped show the real image of America."
The magazine ended its publication in 1978... 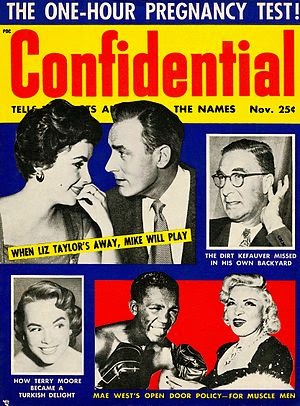 SOURCE
Posted by David Lobosco at 3:00 AM