GUEST REVIEW: IF YOU KNEW SUSIE 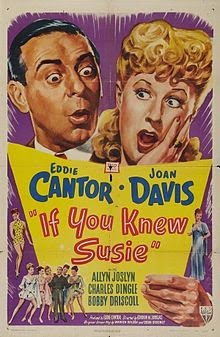 This time around we are printing the review of Eddie Cantor's last feature film If You Knew Susie (1948). I don't have the author's name, but the review is well written and his blog link is below the story...


Today is the anniversary of the release date of the Eddie Cantor comedy If You Knew Susie (1948). This movie is interesting for several reasons. For one, it’s Cantor’s last starring role. While still as popular as ever on radio, his film career had been grinding to a halt for over a decade. The sparkling, fast-paced, Goldwyn/ Busby Berkley musicals of the early 30s were far behind him now. He was already having difficulty solving his film career when World War 2 came along to interrupt things still further.

By 1948, Cantor was 56 years old, and he needed a different character from the fast-talking, brash but timid New York street kid. These were years of reinvention for him. The Cantor of If You Knew Susie was the one Americans knew from his late radio and tv work, a post-war presence not unlike so many others, a middle class, middle aged family man not worlds away from Bing Crosby, Perry Como or Danny Thomas.

Thus, though the title of If You Knew Susie is cribbed by one of Cantor’s most popular, iconic hits of the 1920s, it doesn’t evoke the spirit of that era at all. It merely has that name because it’s the name of the character played by his co-star Joan Davis. Fellow radio star Davis had also co-starred with Cantor in his previous film Show Business (1944), and the two were said to be having a long term affair (so much for the family man!) In Susie, the couple play a pair of retired vaudevillians who move to a small Connecticut town where every one shuns them for being showfolk. Then they just happen to stumble on a latter from George Washington that seems to indicate that he knew Eddie’s ancestor — and owed him money. In the world of the film, this ingratiates him with the locals whose families have all lived there since Colonial times. And truly, this is a FASCINATING bellwether of the tenor of the post-war period. On the one hand, there is an obvious eye-winking joke about Cantor’s Jewish identity: Washington BORROWED MONEY from him? Really? On the other hand, his Jewish identity is buried. His last name is Parker, and as far as the film is concerned he’s as white bread as everyone else. This kind of conformity was the spirit of the age, a definite leap backward from the expansiveness of the 20s and 30s. Even the fact that the Parkers have put show business behind them, and are seeking to ingratiate themselves with the establishment hierarchy. Is the movie funny? Mildly. But mostly you just want the two characters to tell their neighbors to go to hell...

REVIEWER RATING: NOT GIVEN
MY RATING: 6 OUT OF 10 SOURCE
Posted by David Lobosco at 4:30 AM