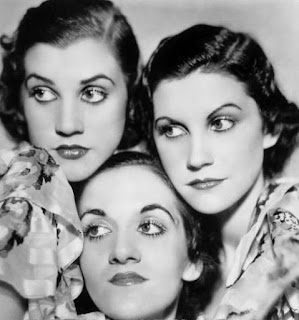 For six years during the 1930s, Patty, Maxene and LaVerne Andrews toured the United States, first with a vaudeville show and then with their chaperoning parents, singing in any club, dive or theater that would hire them. In late 1937, their father was becoming increasingly disgruntled with their struggling career and gave them a deadline for breaking into the big time. If they didn’t make it by the end of the year, they would leave New York, return home to Minneapolis and attend secretarial school.
The deadline was approaching when Dave Kapp, head of Decca Records, happened to hear the Andrews Sisters singing on a New York radio station. Impressed by the young sisters, he asked them to audition for a contract with his record company. They did so and were hired. The contract they signed was a flat fee of $50 without royalties for each two-sided record they made, a common arrangement at that time. Their first record went nowhere on the charts, but Kapp liked the trio and called them in for a second recording session on November 24, 1937. The Aside of the new record was “Nice Work If You Can Get It,” a Gershwin song from the popular Fred Astaire film “A Damsel in Distress.” The B-side, or throw-away side, was an obscure Yiddish love song called “Bei Mir Bist Du Schoen,” often translated as “To Me, You Are Beautiful.” 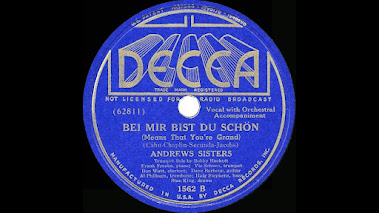 The song was composed by Sholom Secunda with lyrics by Jacob Jacobs for a short-lived 1932 Yiddish musical comedy called “I Would If I Could.” Accounts vary as to how the song ended up in the Decca recording studio. Sammy Cahn, who wrote the English lyrics with Saul Chaplin, claimed that he first heard the song performed by an African-American act at the Apollo Theatre in Harlem, and later found the sheet music in a store in the Jewish Lower East Side of Manhattan. At that time he shared an apartment with Lou Levy, who was managing the Andrews Sisters. Cahn played the song for the sisters; they liked it and would eventually record it. Vic Schoen, the sisters’ arranger, said he discovered the song in a little shop in the lobby of a Yiddish theater on Second Avenue. He gave it to Lou Levy who in turn gave it to Sammy Cahn who with Saul Chaplin wrote English lyrics for it. Levy, however, claimed that he bought the song for fifteen cents in the Lower East Side and passed it on to the sisters to sing in Yiddish at various Jewish clubs and functions in New York City.
However the song got there, it was chosen for the B-side of “Nice Work If You Can Get It.” The recording session was piped into Jack Kapp’s office and when he heard the song being recorded in Yiddish, he interrupted the session and said he wanted it in English. Conflicting stories relate how the English translation came about. Cahn claimed he didn’t want to do a translation, but eventually did so after a couple of days. Levy maintained the song was translated within a few minutes in the recording studio. In another interview, he said the translation was made over the telephone. Vic Schoen created a swing arrangement for the song and directed the studio musicians for the recording. Schoen and Bobby Hackett played trumpet, Al Philburn was on trombone, Don Watt on clarinet, Frank Froeba on piano, Dave Barbour on guitar and Stan King on drums. All were unknown at the time, but several would go on to illustrious careers. 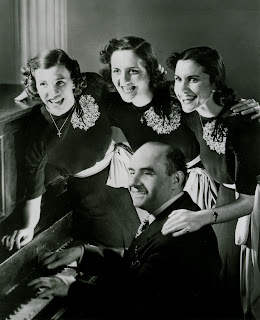 The record was released in December 1937 and to the surprise of all involved, it was “Bei Mir Bist Du Schoen” that drove sales. Word spread rapidly about the new song and record stores were flooded with requests for “Buy a Beer, Monsieur Shane,” “Mr. Barney McShane,” “My Dear Mr. Shane” and “My Mere Bits of Shame.” The customers may not have known how to pronounce the title, but they bought the record. According to one story at the time, a woman’s leg was broken when she was knocked down by a crowd that mobbed a record store to buy copies. The song became such a national sensation that “Life,” the leading photo-news magazine of the day, published a photo essay giving its version of the song’s history. “Bei Mir Bist Du Schoen” reached the Navajo Indian reservation in Utah where it was chanted by Navajo and Ute Indians to aid polio victims in a ceremony celebrating President Franklin D. Roosevelt’s birthday. Some sources claim the song was a hit in several European countries, including Germany until the Nazi Party banned it after learning its composer was Jewish and the song’s title was Yiddish and not a southern German dialect.
“Bei Mir Bist Du Schoen” sold 100,000 copies in its initial release and by the end of January had sold a quarter million copies, an enormous number in those days. Bing Crosby was the only other Decca artist at the time with records surpassing the 100,000 sales mark. The song became a hit before it was published as sheet music, a rare phenomenon back then. Twelve other artists, including Ella Fitzgerald and Kate Smith, recorded the song in hopes of cashing in on its popularity. The American Society of Composers, Authors and Publishers (ASCAP) named “Bei Mir Bist Du Schoen” the most popular song of 1938. 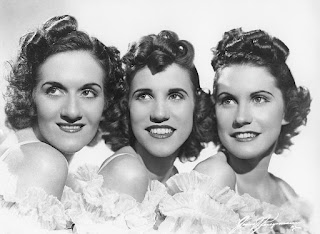 SOURCE
Posted by David Lobosco at 6:50 AM