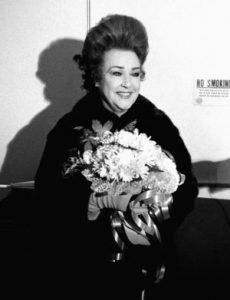 Merman ended the original run of Dolly on December 27th, 1970. It had played 2,844 performances. Skip Koenig was a caregiver to "Pop" Zimmermann [Ethel's Dad that she called "The Father"] for seven years and the best line that Merman said to Skip referred to her HELLO, DOLLY! closing. [She knew that Skip was there.] He praised the performance especially and she said: "I always give the same performance-- sometimes I give a little more.
With her bag of songs from I GOT RHYTHM through ROSES, she definitely had infinite respect for BEFORE THE PARADE PASSES BY. She chose it for 1978's SALUTE TO THE AMERICAN IMAGINATION on CBS; for TEXACO OPENING NIGHT 1982 on NBC; and of course in syndication when she re-enacted receiving the Pied Piper Award on Merv Griffin. June 24, 1982. "ASCAP presents its Pied Piper Award to Ethel Merman whose unique interpretations of some of the greatest songs in the history of the American musical theatre have earned her a following worthy of a true Pied Piper."Quite an ending to a career that began on October 14, 1930 at The Alvin Theater. The marquee was modest enough: GIRL CRAZY-- NEW MUSICAL COMEDY. But from atop The Alvin the title GIRL CRAZY was so emblazoned that it could be seen by every passerby on Broadway at 52nd Street. And there were many as 52nd Street in those Prohibition days was the Speakeasy capital of New York! 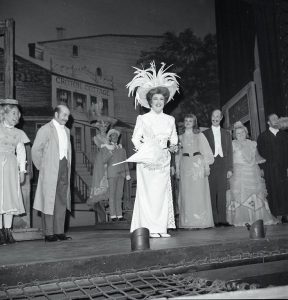 Merman’s last night on a stage anywhere was at the Peabody Auditorium in Daytona Beach, Florida. Merman’s last scheduled song became Before The Parade Passes By. She had two encores of There’s No Business Like Show Business and What I Did For Love. She thanked the audience from the “bottom of my heart.”Through the entire revival Merman's NEW YORK TIMES review was on a billboard illuminating Shubert Alley. As Marie Marchesani said, "Merman was a dame-- a Broad from Astoria with a lot of class."

So ended the original run of HELLO, DOLLY! Merman's CURTAIN SPEECH: "I don't know about you, but I'm going out for some Neapolitan ice cream!" Pearl Bailey would revive the show as her swan song, descending the Harmonia Gardens staircase-- twice. And Carol Channing would end her last Broadway revival on January 28, 1996: the run had been extended and for the final performance folding chairs were added to the rear of the orchestra. Channing's CURTAIN SPEECH: "But you're just standing there-- you're not going anywhere." 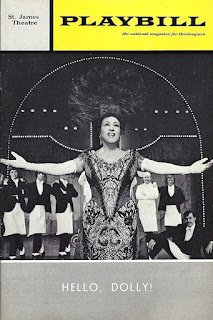