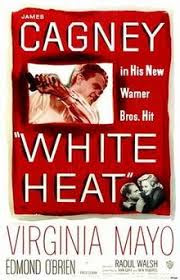 One of my all-time favorite classic Hollywood movies was 1949's White Heat. The movie was nearly cinematic perfection. It included memorable roles for its stars: James Cagney, Virginia Mayo, and Edmond O'Brien. Even fans of this movie genre may not know everything about the film. Here are five pieces of trivia that you may not know about the film...

1. If the surprise expressed by James Cagney's fellow inmates during "the telephone game" scene in the prison dining room appears real, it's because it is. Director Raoul Walsh didn't tell the rest of the cast what was about to happen, so Cagney's outburst caught them by surprise. In fact, Walsh himself didn't know what Cagney had planned; the scene as written wasn't working, and Cagney had an idea. He told Walsh to put the two biggest extras playing cons in the mess-hall next to him on the bench (he used their shoulders to boost himself onto the table) and to keep the cameras rolling no matter what. 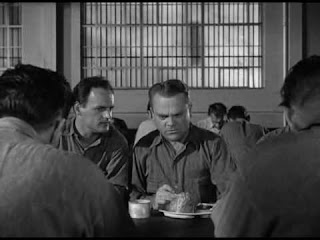 2. The unusually close relationship between Cody Jarrett and his domineering mother was inspired by real life bank robbers Kate Barker (aka "Ma Barker") and her sons.

3. Edmond O'Brien was rather in awe of James Cagney. He found out how generous an actor and gentle a person Cagney could be. In a close-up the two were playing together, O'Brien felt Cagney standing with increasing pressure on the top of O'Brien's right foot, forcing the younger actor to move in that direction. O'Brien realized if he had not done so, he would have been out of frame and Cagney would have had the scene to himself. When the cameras were rolling, Cagney would look like "an angry tiger," but as soon as Raoul Walsh yelled cut, the star would quietly go up to O'Brien with a poem he had written and ask him in a whisper, "Would you mind telling me what you think of this?" When it came time to return to work, Cagney would plead, "Please, don't tell anyone about it." 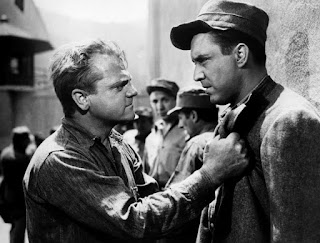 4. Virginia Mayo revealed in an interview that James Cagney was hiding in a different spot than where she had been told he would be during the scene when they are reunited after he's been in prison. He then deliberately missed his cue, causing her shock and fear to be real. She said for a few seconds, she was actually afraid he was going to kill her.

5. In his autobiography Cagney by Cagney (1985), the actor said he found the script "very formula...the old knock-down-drag-'em-out again, without a touch of imagination or originality." Finding Cody Jarrett to be "just another murderous thug," Cagney said he suggested to the writers to pattern the character of Jarrett and his mother after the legendary outlaws Ma Barker and her boys and to make Cody a psychotic. It has also been said that Cagney improvised some of his dialogue and decided to play Jarrett as a man plagued by blinding migraines (that only his mother could soothe). 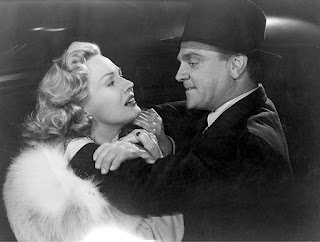 Posted by David Lobosco at 7:09 AM