To honor Bing Crosby on what would have been his 118th birthday, here are some facts that you night not known about the crooner who started it all... 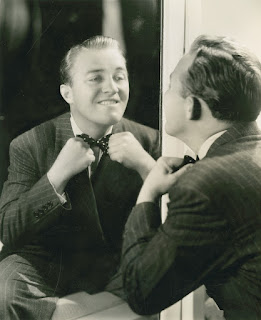 1. HE GOT HIS NAME FROM A COMIC STRIP.

The entertainer was born Harry Lillis Crosby, which doesn't have quite the same ring to it. The nickname "Bing" found him when he was just 7 years old. The Spokane Spokesman-Review ran a comic feature called The Bingville Bugle, which was a parody of hillbilly newspapers. The young Crosby thought the feature was a riot, and would giggle uncontrollably when reading it. A neighbor noticed his laughter and started calling Crosby "Bingo from Bingville." The "o" eventually went away, but the nickname stuck.

When television fans think of Columbo, they probably envision Peter Falk starring as the title character. However, the job could have been Crosby's. The Columbo character made his debut in 1960 on The Chevy Mystery Show with Bert Freed portraying the detective. Thomas Mitchell also spent some time in the role, but the character really exploded when NBC decided to make a television movie in 1968.

The film's producers wanted either Crosby or the great Lee J. Cobb to portray Columbo, but Cobb couldn't squeeze it into his schedule. Crosby turned down the role for a funnier reason: he thought it would interfere with his golfing. At that point Bing considered himself mostly retired, and he didn't want to deal with the long drag of shooting keeping him off of the links. 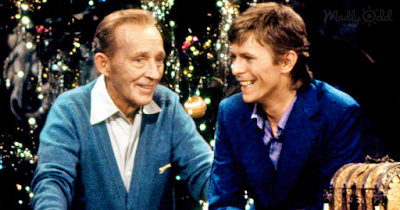 3. "PEACE ON EARTH," HIS CHRISTMAS DUET WITH DAVID BOWIE, ALMOST FELL APART AT THE LAST MINUTE.

The Thin White Duke was set to appear on Crosby's Christmas TV special in 1977 when the production hit a snag. The producers had decided that Bowie would sing "The Little Drummer Boy," but Bowie felt the song wasn't really right for him and refused to sing it.

The nervous producers huddled and decided to rewrite the song in an attempt to get something Bowie would actually perform. With just hours to go before the broadcast, the musical team wrote an alternative version with a new melody and alternate lyrics. Bowie liked the new version, dubbed "Peace on Earth," and agreed to perform it with Crosby, complete with a stilted intro sketch.

The song actually had staying power, and RCA ended up releasing it as a single in 1982; it still gets little resurgences each holiday season.

Crosby wasn't just a golfer; he also enjoyed a little bit of action at the track. In 1937, he teamed up with a group of fellow superstars to open the Del Mar Racetrack just north of San Diego. In addition to Crosby, the team of investors included Jimmy Durante and Oliver Hardy. Crosby was at the track's gate on its opening day, shaking hands and greeting guests, and the track soon became one of California's hottest spots for celebrity sightings.

The racing itself wasn't too shabby, either: The track played host to the famous winner-take-all two-horse race between Seabiscuit and Ligaroti. The race was such big national news that NBC radio made it the company's first-ever national broadcast of a horse race. 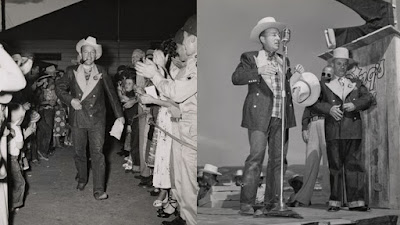 5. CROSBY IS PARTLY RESPONSIBLE FOR THE CANADIAN TUXEDO.

Before denim-on-denim was a certified fashion trend, pairing a jean jacket or shirt with your favorite pair of blue jeans was considered a sartorial faux pas. Nicknamed the “Canadian Tuxedo,” the look has been the butt of many pop culture jokes for years—perhaps most famously in the movie Super Troopers.

However, Boing Boing traces the outfit back to Crosby. According to Levi’s Vintage Clothing, legendary singer Bing Crosby was denied entrance into a Canadian hotel in 1951 because he and his companion were clad in head-to-toe denim. Management soon realized that Crosby was a celebrity and let him in. However, tales of the incident spread, and designers at Levi Strauss and Co. eventually caught wind and designed Crosby a custom jean tuxedo jacket. That way, his denim would be dressed up enough for the swankiest of establishment.
Posted by David Lobosco at 7:35 AM