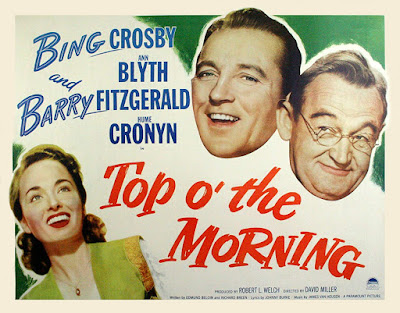 Like many of Bing Crosby films, the singing was the major draw of the film. My favorite number was Bing singing “When Irish Eyes Are Smiling”. Bing did not record the number for the movie soundtrack, but he did record it a few years before the film was made, on May 7, 1946. The songwriting team of Jimmy Van Heusen and Johnny Burke were commissioned to write new songs for the film, but only two songs were written. They wrote the title song “Top O’ The Morning”, which was my favorite song from the film. Bing must have liked the song too, because he sang it three times in the film. The songwriters also wrote a pretty forgettable ballad called “You’re In Love With Someone”, which Bing sang, and then it was sung later in the film as a duet with Bing and Ann Blyth. Rounding out the music were traditional Irish songs like “Kitty Coleraine”, “The Donovans”, and “Oh Tis Sweet To Think”.

Bing was in fine voice towards the end of the 1940s, and as always, he was his charming self in the movie, so he cannot be blamed for this misguided film. Bing did however personally selected David Miller as director of Top O’ the Morning.  Groucho Marx recommended him to Bing.  Miller had just completed what turned out to be the final Marx Brothers’ film.  It was Love Happy, the least revered of all the Brothers’ films. I think also movie audiences were changing as television was beginning to take hold. 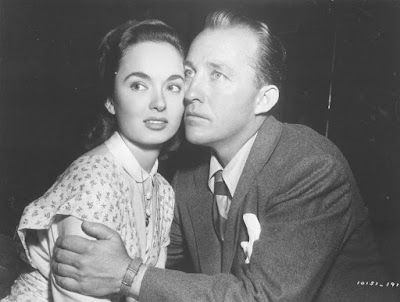 Some of the critics liked the film though:

Bing Crosby, after two lush Technicolored musicals, has been handed a light, frothy and more moderately budgeted picture by Paramount to cavort in, which should put him once more at the top of that studio’s breadwinning list.
…Under David Miller’s light-handed direction, Crosby and the rest of the cast fall right into the spirit of the story. Groaner, despite his having to play to a gal (Ann Blyth) who is so obviously younger, is socko. His easy way with a quip, combined with his fine crooning of some old Irish tunes and a couple of new ones, is solid showmanship.
…Johnny Burke and James Van Heusen have cleffed two bright new tunes for the film, both of which, with Crosby to introduce them, should get plenty of play. “You’re in Love with Someone,” a ballad, has the edge but the other, “Top O’ the Morning,” has the lilt that Crosby fans go for. Crooner also gets a chance to dispense a round of traditional Irish airs, ranging from “Irish Eyes” to the lesser-known but more sprightly variety.
(Variety, July 20, 1949)

In my opinion, Top O’ The Morning is not a great Bing Crosby movie, but even a bad Bing film is worth viewing. The last fifteen minutes of the movie is the best, and some of the plot is pretty sinister for a lighthearted Bing film. Bing and the cast does the best they could with the script, and this film is worth watching. My copy came from a showing on AMC Network in 1998, and now TCM has also shown the film, so if you get a chance check out this slight Bing film. The film was not great but pleasant enough... 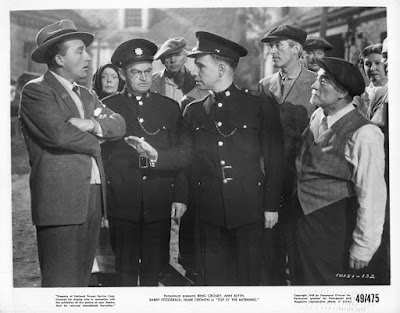 Posted by David Lobosco at 6:20 AM