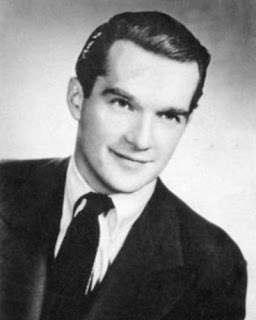 One of the top male vocalists of the late 1930s, Jack Leonard was rivaled only by Bing Crosby in popularity. Leonard got his start singing at a roadside stand on Long Island and worked on the government relief team that built New York’s Jones Beach in the early 1930s. He was singing in Bert Block’s orchestra in 1935 when Tommy Dorsey hired him away. Dorsey also took trumpeter Joe Bauer and arranger Axel Stordahl, then known as Odd Stordahl. Together the men formed a vocal group call the Three Esquires. It was as a soloist, though, that Leonard would achieve stardom, singing on such classics as “Marie,” “All the Things You Are,” “Our Love,” and “Indian Summer.”

Leonard was a shy, handsome man who was liked by all. He was very near-​sighted but refused to wear glasses in public so as not to spoil his romantic image. His departure from Dorsey’s orchestra in November of 1939 was a surprise to his bandmates. The rumor was that Dorsey had grown suspicious of Leonard’s intentions, fearing that he was going to leave soon for a solo career, and had forced him out, though Leonard himself tried to dispel it at the time, saying he just needed a break and would return soon. He never did. He was replaced in the band by Allan DeWitt, who failed to work out and was replaced after only one month by Frank Sinatra. 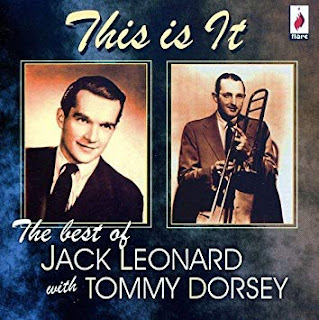 Leonard’s popularity kept him busy after leaving Dorsey. Readers selected him as among the top three male singers in Billboard’s college polls for both 1939 and 1940. He worked on radio, on stage and in the recording studio for Okeh Records until May 1941, when he received his draft notice. His draft board proposed putting him in an Army entertainment unit, though Leonard refused. He ended up leading a band anyway, at Fort Dix, New Jersey.

Discharged in 1945, Leonard continued singing professionally throughout the 1940s and into the 1950s, though he never achieved the level of recognition he had during the late 1930s. He signed a two-​year deal with Majestic Records in December 1945 and made three minor silver screen appearances in the late 1940s. He also had his own television program in 1949 and appeared as one of the hosts for Broadway Open House in 1951. He made a brief return to the recording studio with Tommy Dorsey’s orchestra in 1951, and in 1956, he performed at the memorial concert in tribute to the late bandleader.

Leonard also served as Nat King Cole’s business manager and later worked in music publishing before retiring in the 1970s. He made a brief return to singing and appeared on PBS's "Jukebox Saturday Night" special in 1983. Jack Leonard died from cancer in 1988, age 75.... 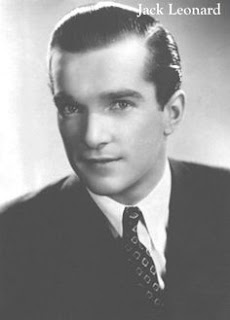 SOURCE
Posted by David Lobosco at 7:53 AM