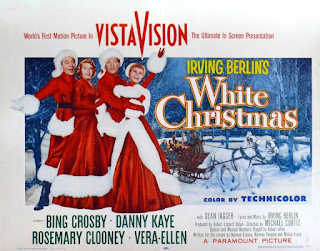 White Christmas is considered a holiday classic today, over 60 years after it was originally in movie theaters. I thought it would be interesting to see what critics thought of the film when it was new in 1954. Here is a review by Bosley Crowther that appeared in the New York Times of October 15, 1954...

IT was twelve years ago that Bing Crosby was in a place and a film called "Holiday Inn," wherein he sang a little number tagged "White Christmas," written—as was all the music in that picture—by Irving Berlin. The occasion was happily historic, for a reason we scarcely need recall: "White Christmas" and Mr. Crosby became like "God Bless America" and Kate Smith—so much so, indeed, that the notion of starring Mr. Crosby in a film that would have the title "White Christmas" was broached as long as six years ago.

Various obstructions beset it, but the purpose was ultimately achieved. "White Christmas," with Mr. Crosby, opened yesterday at the Music Hall. What's more, it is in Technicolor and VistaVision, which is Paramount's new wide-screen device, and it has Danny Kaye, Rosemary Clooney and Vera-Ellen in addition to its focal star. A new batch of Irving Berlin numbers comprises its musical score. Paramount, to put it simply, has done "White Christmas" up brown.

But, oddly enough, the confection is not so tasty as one might suppose. The flavoring is largely in the line-up and not in the output of the cooks. Everyone works hard at the business of singing, dancing and cracking jokes, but the stuff that they work with is minor. It doesn't have the old inspiration and spark. 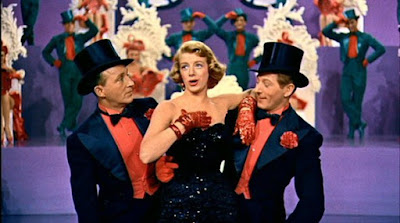 For one thing, the credited scriptwriters—Norman Krasna, Norman Panama and Melvin Frank—have shown very little imagination in putting together what is sometimes called the "book." They have hacked out a way of getting two teams of entertainers—a pair of celebrated male hoofers and a singing sister act—to a ski lodge in New England (reminiscent of the Holiday Inn) which happens to be run by the good old general of the outfit the fellows Were in during the war. And to show their appreciation of the good old general and the difficult circumstances he appears to be in, they provide free entertainment and call in a big rally of comrades for the Christmas holidays.

It is a routine accumulation of standard romance and sentiment, blessed by a few funny set-ups that are usually grabbed with most effect by Mr. Kaye. And the music of Mr. Berlir is a good bit less than inspired Outside of the old "White Christmas," which is sung at the beginning and the end, there are only a couple of numbers that have a measure of charm. One of these is "Count Your Blessings," a song of reassurance that Mr. Crosby and Miss Clooney chant, and another is "The Best Things Happen While You're Dancing," which Mr. Kaye sings and to which he and Vera-Ellen cavort. 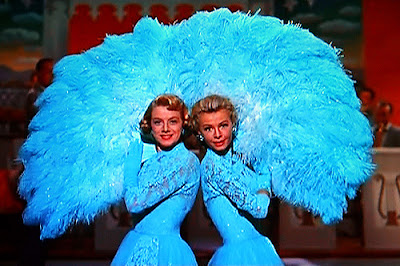 Three numbers are given over to the admiration of generals and Army life, which seems not alone an extravagance but a reckless audacity. Even the sweetness of Dean Jagger as the old general does not justify the expense. Someone's nostalgia for the war years and the U. S. O. tours has taken the show awry.

Fortunately, the use of VistaVision, which is another process of projecting on a wide, flat screen, has made it possible to endow "White Christmas" with a fine pictorial quality. The colors on the big screen are rich and luminous, the images are clear and sharp, and rapid movements are got without blurring—or very little—such as sometimes is seen on other large screens. Director Michael Curtiz has made his picture look good. It is too bad that it doesn't hit the eardrums and the funnybone with equal force... 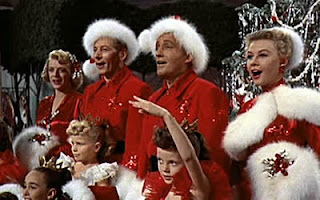