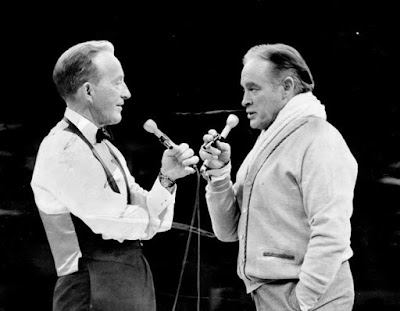 This interesting article was originally published in the Daily News on Feb. 12, 1968. This story was written by Nathan Kanter and Arthur Mulligan...

The new Madison Square Garden had a historic and glittering premiere last night as 19,832 persons paid $10 to $250 a seat to attend a “Salute to the USO” and be entertained by the antics of such performers as Bob Hope and Bing Crosby.

It was a gay and responsive crowd, liberally sprinkled with men in military uniforms, which turned out for a fun night in Fun City but with a noble underlying motive. The proceeds are scheduled for the benefit of the United Service Organizations.

Scores of celebrities were on hand, including Mayor Lindsay, who showed up in a tuxedo after tapping this weekly TV show. The Hollywood premiere flavor was somewhat marred by a group of 25 peaceniks who handed out pamphlets and shouted catcalls at servicemen at the Seventh Ave. entrance.

None of the military men paid them so much as a glance but witnesses reported that one irate middle-aged male civilian landed a good right hook on the chin of one of the demonstrators, then continued on into the Garden.

The show was supposed to get under way at 8:30 p.m., but it was 8:50 before the mayor showed up. It was 9 p.m. when Les Brown and his orchestra struck up the National Anthem, accompanied by the cadet glee club of the United States Military Academy at West Point.

John (Bud) Palmer, the city’s official greeter, then introduced Sen. Jacob Javits, Jack Dempsey, Gene Tunney, and George Champion. Champion, general manager of the “Salute to the USO,” and board chairman of Chase Manhattan Bank, showed that Lindsay had a friend at that bank.

Champion introduced Lindsay as a “courageous mayor.” Half of the assemblage gave Lindsay a standing ovation and the other half applauded politely, if not resoundingly.

Lindsay, in introducing Hope, remarked that the comedian had been in many zones of combat, then quipped: “Welcome to New York,” an obvious reference to the bitterness engendered by the recent sanitationmen’s strike.

“I’ve salvaged at least one thing out of these last few days,” Lindsay added. “At least they’ve, stopped calling me Mr. Clean.”

In his turn, Hope cracked: “I’m happy that he (Lindsay) came here from his busy schedule. It just proves what one actor will do for another.”

At another point, Hope remarked of Lindsay: “Isn’t it wonderful how he walks all over the city. I guess he can’t get a cab either.”

Gov. Rockefeller was supposed to show up but if he did nobody saw him.

Hope and his guests, many of them ad-libbing with the help of “idiot cards” -- much of the big show being taped for a telecast tonight -- were light of heart. Pearl Bailey started her songs with “Poor Butterfly” and end with “Mame.” Bing Cosby, Hope’s co-star of the evening, began with “Cockeyed Optimist” and later joined his partner in a medley of songs... 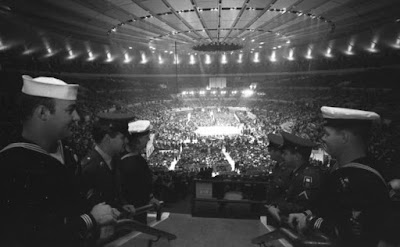 SOURCE
Posted by David Lobosco at 8:12 AM