I was ready to go to bed the other night, but I figured I'd flip through the channels one more time. Almost ready to give up, I stumbled on Blazing Saddles (1974) on one of the channels - I think it was Encore. Now I have seen the movie countless times, and I am one of the many people that think that director Mel Brooks was a genius in the 1970s. The film is nearly perfect, and I was not sure to write about - the movie has been reviewed countless times, and people are still talking about the movie almost 40 years after it came out. What I thought would be interesting would be to take a look at some of the fun facts about Blazing Saddles that many people may now know... 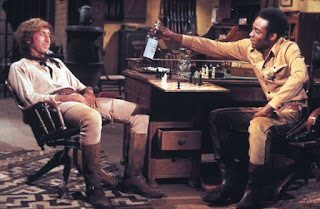 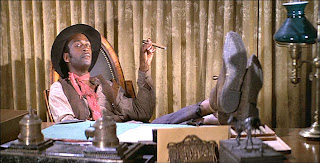 2. “The whole movie cost about $2.6 million—nobody got anything.” Brooks said he hardly made much himself, around $50k to write, direct, for everything. The remaining writers (after those that left for financial reasons) held in there and finished writing. They’d write every day until around midnight, then walk to Chinatown where there was a restaurant they liked—they’d have beef and broccoli and a Pepsi, then walk back. Brooks spoke of working hard to get the script done, it had to be completed by July.

3. Liam Dunn (Young Frankenstein, Silent Movie), who played Reverend Johnson, was described by Brooks as “very weird.” The actor had emphysema and when he would finish a scene, they’d ask him “Do you want water? Do you want orange juice? Do you want a cigarette?” Dunn would always choose the cigarette; he’d take a few puffs of smoke, then a few puffs of oxygen. 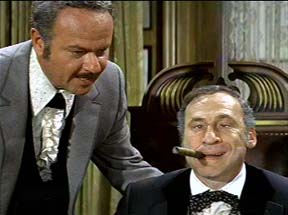 4. Brooks wanted actor Dan Dailey (It’s Always Fair Weather, The Getaway, My Blue Heaven [1950]) for The Waco Kid, calling him the best civilian horse rider around, but Dailey said he couldn’t do it, he was blind (wore “Coke bottle glasses”). Brooks later ran into John Wayne in the commissary and asked him to read the script. Wayne told Brooks he would read it that night and that Mel should meet him back at the commissary at noon the next day. When they met again, the actor said it was too dirty; “I can’t do it, I’m John Wayne.” Wayne did love the script and told Brooks he was up all night screaming, he loved it and would be first in line to see it.

5. Instead of background music, Brooks wanted foreground music—it had never been done. He brought in Count Basie (“the sweetest guy”) and his band to play April in Paris out in the desert. A composer himself, Brooks wrote I’m Tired and The French Mistake. Composer John Morris and Mel Brooks were both nominated for the title song which was performed by Singer/Songwriter/Actor Frankie Laine. (They lost to The Towering Inferno’s We May Never Love Like This Again.) Brooks said Laine sang with all his heart and tears in his eyes—they didn’t tell him the film was a comedy—Mel thought it worked beautifully.

6. Actress Hedy Lamar (Samson and Delilah, The Strange Woman sued the production for unauthorized use of her name; the case was settled out of court for “not a lot of money, a few thousand dollars. Brooks apologized for “almost using her name.” 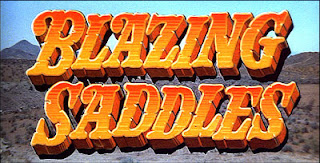