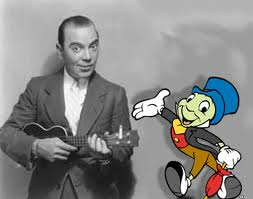 One of the joys of childhood is discovering the classic Walt Disney cartoons. What child does not know the classic songs from Snow White and The Seven Dwarfs or Pinocchio.  One of the greatest songs to come out of those movies was "When You Wish Upon A Star". It not only was a great song from the movie Pinocchio, but it in my humble opinion one of the greatest songs ever written. The movie and the song itself have overshadowed the original voice who sang that song - the great Cliff Edwards. Edwards is barely remembered at all except maybe for being the voice of Jiminy Cricket, but he was so much more. Before his 1940 recording of "When You Wish Upon A Star", Edwards had been a great jazz musician and singer for years. His recordings during the jazz era defined a whole genration, but unfortunately Edwards life was not as happy as many of the songs he sung.

Clifton Edwards was born in Hannibal, Missouri., on June 14, 1895. As a child, he sold newspapers and worked in a shoe factory and then ran away from home before finishing school. Before the age of 16, he was singing in St. Louis saloons and, since many of these dives had no piano, he learned how to play the ukulele to provide his own accompaniment. (He tried to attract more tips by planting a dollar bill on his uke.) His first traveling job was working with a carnival pitchman who sold nose whistles in department stores so Edwards learned how to play the kazoo.

In Chicago, Edwards attracted the attention of Joe Frisco, a popular stuttering comedian, who hired Edwards as part of his vaudeville troupe and he eventually ended up playing the Palace Theater on Broadway. Edwards became a star performer in his own right and appeared in Ziegfeld's Midnight Follies, as well as making the rounds of the Keith-Albee circuit of more than 400 vaudeville venues around the country. Edwards adopted the stage name "Ukulele Ike" after a waiter at the Arsonia Cafe in Chicago where he was performing couldn't remember his name and kept calling him "Ike".

Cliff made his first record in 1919, and by the early 1920s he was one of the most popular recording stars, and his record sales was up there with popular crooner Gene Austin. Listening to these early recordings, the audience can really hear what a great jazz sing Edwards was. Recordings like "Fascinating Rhythm", "Hard Hearted Hannah", and "I'll See You In My Dreams" are great examples of a talent at the top of their profession. 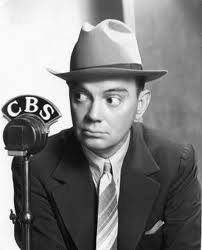 After dominating records and vaudville, it was only natural for Edwards to get a call from Hollywood. He caught the eye of movie producer Irving Thalberg, and he signed Edwards to a contract with MGM. His first movie appearance was in the forgotten film "Marianne" in 1928, but his next appearance in "Hollywood Revue of 1929" would be a much better appearance. The movie featured many of MGM's biggest stars of the day like Jack Benny, Marion Davies, and Buster Keaton. The film was basically as the title says a revue. Benny was the master of ceremonies introducing the acts. Cliff Edwards introduced the song "Singin In The Rain" in the film (which would go on to be a hit for Gene Kelly in 1952), and he performed a number of skits. During the movie he befriended comedian Buster Keaton, and they starred in a number of movies together until MGM dropped Edwards in 1933 due to his growing drug use.

In the mid 1930s he moved on to RKO Pictures where he made a series of B-movies. In 1939, he voiced the off-screen dying Confederate soldier in Gone with the Wind in the makeshift hospital scene with Vivien Leigh and Olivia De Havilland casting large shadows on a church wall. In 1940 came his most famous voice role, as Jiminy Cricket in Walt Disney's Pinocchio. Edwards's rendition of "When You Wish Upon a Star" from that film is probably his most familiar recorded legacy. In 1941, he voiced the head crow in Disney's Dumbo and sang "When I See an Elephant Fly". For the rest of his career Cliff Edwards would be associated with Walt Disney. That association would ultimately be as much of a curse as it was a blessing.

Edwards was careless with the money he got in the boom years of the 1920s, always trying to sustain his expensive habits and lifestyle. While he continued working during the Great Depression, he would never again enjoy his former prosperity. Most of his income went to alimony for three former wives and for paying other debts. He declared bankruptcy four times during the 1930s and early 1940s. Edwards married his first wife Gertrude Ryrholm in 1919 but they divorced in 1923. He married his second wife Irene Wylie in 1923, and they divorced in 1931. In 1932, he married his third and final wife actress Judith Barrett. They divorced in 1936. He never had any children. 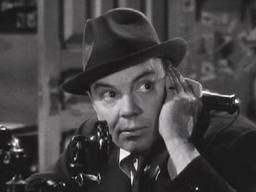 Throughout the 1950s and 1960s, Edwards wandered around Hollywood from any job he possibly get. His once great singing voice now was weak with the years of alcohol and drug abuse it had endured. He made sporadic appearances on television into the 1960s, where he sometimes appeared on the Mickey Mouse Club. Gone were the glory years of the jazz era and the fame of the 1940s, Edwards faded further and further down a lonely path of isolation and loneliness.

In 1967, the Disneyland record The Further Adventures of Jiminy Cricket was released and according to respected Disney musicologist Greg Ehrbar "deteriorating health had caused Cliff Edward's diction to become slurred and his brilliant comic timing to virtually evaporate in what would be his last Disney recording." In his last years, Edwards sometimes spent his days hanging around the Disney Studio lot in hopes of more work and was occasionally taken to lunch by animators eager to hear his tales of the golden age of vaudeville.

He was no longer officially employed by Disney when he entered a nursing home in Hollywood in 1969 as a charity patient supported by the Actor's Fund. The Disney Company quietly paid Edwards' medical expenses as well. 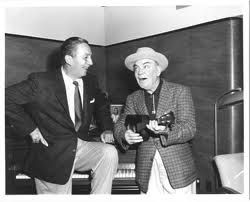 At the time of his death from a heart attack at the Virgil Convalescent Hospital on July 17, 1971, at the age of 76, Edwards' passing wasn't reported to the public for several days because hospital officials didn't consider it newsworthy since they didn't know he had ever been famous. His body was initially unclaimed and donated to the UCLA medical school. When Walt Disney Productions, which had been paying many of his medical expenses, found out about this, it offered to purchase the corpse and pay for the burial.

Thirteen years after Edwards' death, Disney provided a marker for the performer's grave when the lack of a proper headstone was reportedly brought to the company's attention by the Ukulele Society of America. In addition to his name and years of life, the marker simply reads, "In loving memory of Ukulele Ike."

Cliff Edwards was so much more than Ukelele Ike or Jiminy Cricket, he was really a great jazz artist. I would put his recordings of the mid 1920s up against anything put out by Joe Venuti and Eddie Lang at the time. Like so many other talented people in Hollywood, that talent was masked by some true demons. Who knows what heights Cliff Edwards' career would have taken had he not plunged into alcohol and drug addiction. Whenever I hear Edwards sing the optimistic song "When You Wish Upon A Star", I can not help but to feel a little sad at what a lonely life he led. People may not know who Cliff Edwards is, but it is gratifying that young fans at least fall in love with the Jiminy Cricket character that Edwards created, and a whole new generation is wishing upon a star... 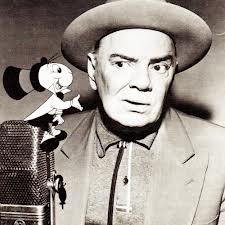 Posted by David Lobosco at 5:52 AM