Vintage Rolls Royce presented to Marlene Dietrich as a gift from her studio bosses expected to fetch £350,000 at auction
By Daily Mail Reporter 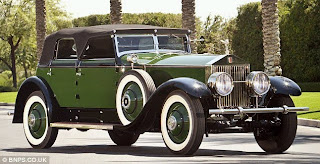 A vintage Rolls Royce that was given to screen goddess Marlene Dietrich by her Paramount studio bosses is set to fetch £350,000 at auction. The Phantom I sedan was given to the actress and singer to help her settle in to Hollywood life when she moved there in 1930 from her native Germany.
Dietrich was often photographed being chauffeur-driven around Los Angeles in it and the car even went on to feature in her first Hollywood film Morocco in 1930.

The stunning car was given to the German-born actress and singer to help her settle in to Hollywood life when she moved there in 1930 from her native Germany. The blonde siren sold the 1929 Rolls Royce Phantom I Convertible Sedan in 1945 to a millionaire - and it has been in private ownership ever since. It is now come to public light again after its current owner, a classic car collector, died recently and his family decided to sell it at auction.

Dietrich reportedly fell in love with the car and it went on to be used in her first Hollywood movie, Morocco, in which she starred opposite Gary Cooper.

When the late vendor bought the Rolls Royce it was in a decrepit condition with its original green paintwork being stripped back to its shell. He spent tens of thousands of pounds on restoring the motor to its former glory before his death. It is likely to be highly sought-after not only because of its association with the screen legend but it is also unique. 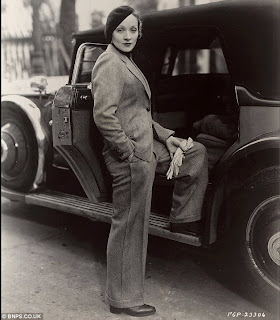 Before giving it to Dietrich, Paramount Studios commissioned a custom car body builder to turn it into a stylish convertible. The finished product cost £17,000 and was one of the most expensive cars in the world at the time. The car comes complete with a small shelf in the back that still houses Dietrich's compact mirror for make-up and two bottles of perfume.

Eric Minoff, of auctioneers Bonhams which is selling the car, said: 'It was given to Marlene Dietrich as new in 1930 by Josef von Sternberg, a movie director at Paramount Studios.

SOURCE
Posted by David Lobosco at 4:33 AM