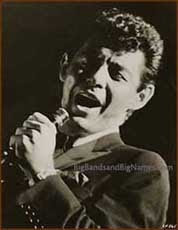 1950s singer Eddie Fisher has passed away. Discovered by Eddie Cantor in the late 1940s, Fisher had a troubled career and an even more troubled relationship with his wives and children. He had been out of the spotlight for quite some time...

LOS ANGELES – Pop singer Eddie Fisher, whose clear voice brought him a devoted following of teenage girls in the early 1950s before marriage scandals overshadowed his fame, has died at age 82.

He passed away Wednesday night at his home in Berkeley of complications from hip surgery, his daughter, Tricia Leigh Fisher of Los Angeles, told The Associated Press.

"Late last evening the world lost a true America icon," Fisher's family said in a statement released by publicist British Reece. "One of the greatest voices of the century passed away. He was an extraordinary talent and a true mensch."

The death was first reported by Hollywood website deadline.com.

His fame was enhanced by his 1955 marriage to movie darling Debbie Reynolds — they were touted as "America's favorite couple" — and the birth of two children.

Their daughter Carrie Fisher became a film star herself in the first three "Star Wars" films as Princess Leia, and later as a best-selling author of "Postcards From the Edge" and other books.

Carrie Fisher spent most of 2008 on the road with her autobiographical show "Wishful Drinking." In an interview with The Associated Press, she told of singing with her father on stage in San Jose. Eddie Fisher was by then in a wheelchair and living in San Francisco.

The Fisher-Taylor marriage lasted only five years. She fell in love with co-star Richard Burton during the Rome filming of "Cleopatra," divorced Fisher and married Burton in one of the great entertainment world scandals of the 20th century.

Edwin Jack Fisher was born Aug. 10, 1928, in Philadelphia, one of seven children of a Jewish grocer. At 15 he was singing on Philadelphia radio.

After getting out of the Army in 1953 following a two-year hitch, hit records, his own TV show and the headlined marriage to Reynolds made Fisher a top star. The couple costarred in a 1956 romantic comedy, "Bundle of Joy," that capitalized on their own parenthood.

In 1960 he played a role in "Butterfield 8," for which Taylor won an Academy Award. But that film marked the end of his movie career.

After being discarded by Taylor, Fisher became the butt of comedians' jokes. He began relying on drugs to get through performances, and his bookings dwindled. He later said he had made and spent $20 million during his heyday, and much of it went to gambling and drugs.

He had added to his notoriety that year with an autobiography, "Eddie: My Life, My Loves." Of his first three marriages, he wrote he had been bullied into marriage with Reynolds, whom he didn't know well; became nursemaid as well as husband to Taylor, and was reluctant to marry Connie Stevens but she was pregnant and he "did the proper thing."

Another autobiography, "Been There, Done That," published in 1999, was even more searing. He called Reynolds "self-centered, totally driven, insecure, untruthful, phony." He claimed he abandoned his career during the Taylor marriage because he was too busy taking her to emergency rooms and cleaning up after her pets, children and servants. Both ex-wives were furious, and Carrie Fisher threatened to change her name to Reynolds.

At 47, Fisher married a 21-year-old beauty queen, Terry Richard. The marriage ended after 10 months. His fifth marriage, to Betty Lin, a Chinese-born businesswoman, lasted longer than any of the others. Fisher had two children with Reynolds: Carrie and Todd; and two girls with Stevens: Joely and Tricia.