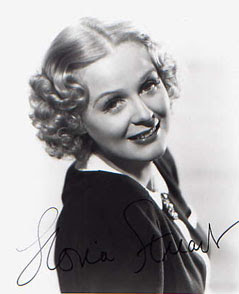 Legendary actress Gloria Stuart has died at the age of 100. She made movies from ROMAN SCANDALS(1933) with Eddie Cantor to TITANIC(1997) with Kate Winslet. Not many actors or actresses had the longevity that Gloria Stuart had...

LOS ANGELES – Gloria Stuart, the Hollywood actress of the 1930s who gained an Oscar nomination 60 years later for her role as the spunky survivor in "Titanic," has died. She was 100.

In her youth, Stuart was a blond beauty who starred in B pictures as well as higher-profile ones like "The Invisible Man" and two Shirley Temple movies.

She resumed acting occasionally in later years and was selected to play the elderly Titanic survivor portrayed by Kate Winslet as a young woman.

The 1997 "Titanic" became the biggest modern blockbuster up to that point. Both Winslet and Stuart, then 87, were nominated for Oscars.