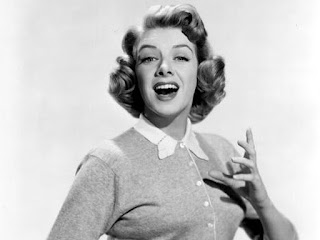 Rosemary Clooney was born in Maysville, KY in 1928. She was a singer and actor. Her hits include "Come On-a My House" and "This Ole House." She appeared in the movies "White Christmas" and "The Stars are Singing." She also had her own variety show "The Rosemary Clooney Show."

The Rosemary Clooney Music Festival started in 1999, and is held anually in Maysville. .In 1994 she made her final film appearance in Radioland Murders. In 1995 she guest-starred in the NBC television medical drama "ER" and for her performance, she received a Primetime Emmy Award nomination for Outstanding Guest Actress in a Drama Series. In 1999 she published her second autobiography, "Girl Singer: An Autobiography," that described her constant battles with addiction to prescription drugs for depression, and how she lost and then regained a fortune. The same year, she founded the Rosemary Clooney Music Festival, held annually in her hometown of Maysville, Kentucky, performing there every year until her death. 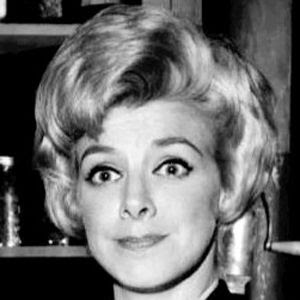 In 2001 she was diagnosed with lung cancer and died at her home six months later at the age of 74. Her life was dramatized in the 1982 made-for-television movie, "Rosie: The Rosemary Clooney Story," played by actress Sondra Locke. She received the Grammy Lifetime Achievement Award in 2002 and in 2003 she was inducted into the Kentucky Women Remembered exhibit and her portrait by Alison Lyne is on permanent display in the Kentucky State Capitol's rotunda in Frankfort. She was the aunt to Academy Award-winning actor George Clooney and mother-in-law to singer Debby Boone.

The grave of singer Rosemary Clooney is located in St. Patrick's Cemetery in Maysville, KY. This gravestone is located on the northern edge of the cemetery. There are no signs to locate the grave. Her headstone is very simple.There are many families buried together in this cemetery. It was suggested by the groundskeeper that more of the Clooney family is planning to be burried here... 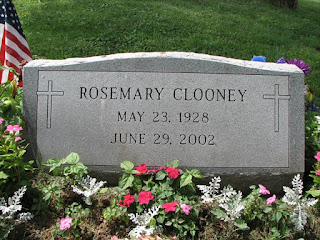 Posted by David Lobosco at 8:20 AM