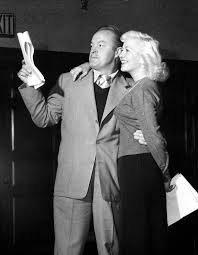 With two movies, a weekly radio show and several overseas tours, 1950 was the busiest-ever year for superstar funny man Bob Hope. No wonder Dolores, his wife of 15 years, spent much of the time alone in their Hollywood mansion. Not that she worried about the state of their marriage.


"I don't like Bob being away so much but I trust him absolutely," Dolores told Hollywood gossip columnist Louella Parsons. "Our marriage is stronger than ever."

Only a handful of Bob Hope's closest friends knew that Dolores was living in a make-believe world.

Her husband had fallen in love with another woman and for the next ten years was to conduct a secret love affair under the very noses of the media without a word of it being made public. Hope, then 47, had met 28-year-old dark-haired Marilyn Maxwell at MGM where she was on a five-year contract, but she hardly noticed him — she was having an affair with Frank Sinatra!
When that ended in January 1950 she re-met Bob Hope when he asked her to appear in a huge charity gala he was organising at the Hollywood Bowl. Despite being married to Beverly Hills restaurateur Andy McIntyre, Marilyn was captivated by the wisecracking star. Soon they were meeting in secret and when Hope was looking for a co-star for his latest movie comedy, The Lemon Drop Kid, he chose Marilyn Maxwell.
Soon afterwards, Marilyn confided to her hairdresser: "I'd marry Bob and I think he'd marry me, but Dolores is a strict Catholic and would never let him go. 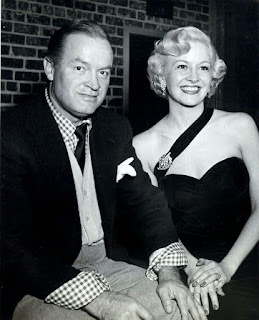 "Their happy marriage is a sham. I know Bob loves me and is only happy with me. I don't mind staying in the shadows so long as it means we can be together."
In April 1951, after making My Favourite Spy, Hope and Marilyn Maxwell sailed for Europe on the liner Queen Mary for a promotional tour. This time gossip got back to Dolores who phoned her husband in London furious that he was publicly humiliating her. "Marilyn Maxwell is just an actress I work with," Bob Hope told her. When we're not working I never see her. Which was a little wide of the truth: the next day the couple flew for a holiday in Ireland when, according to Bob Home's long-time secretary Jean Greenberg, Hope asked Marilyn to marry him.
"She turned him down. She knew that Dolores would never give him a divorce. She also feared that if it was known that she was breaking up what was regarded as a fairytale Hollywood marriage, the big studios would never employ her again."
Added Jean Greenberg: "Bob and Dolores might appear happy together in public, but in fact they hadn't slept together in years." 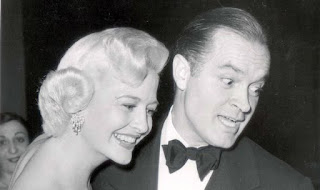 In 1954 Marilyn Maxwell, who had divorced Andy McIntyre, married writer/producer Jerry Davis in 1954. But that didn't stop her passionate affair with Bob Hope. He provided her with a secret love-nest in Hollywood's Holmby Hills where they met several times a week.
By now, according to close friends, Hope had several times asked his wife for a divorce and she had refused. She had told him: "I don't care what you get up to in private. All I ask is that you don't humiliate me in public. People think we are happily married and I want that to continue."
Hope would organise private dinner parties for himself and Marilyn Maxwell in the luxurious Hollywood offices of his production company.  Food would be delivered from Romanoff's, Hollywood's top restaurant, and served on silver dishes. Then the waiters would leave and Hope and his mystery guest would enjoy a sumptuous meal.
Said Romanoff's boss Kart Niklas: "Bob would never say who he was entertaining but we always knew it was Marilyn Maxwell. It was a ritual that went on for years.
Friends said that Marilyn was the great — and secret — love of Bob Hope's life. He always hoped that one day they would be married but on March 21, 1971 that dream was shattered for good.
At 49, Marilyn Maxwell was found dead in her Beverly Hills home, apparently of natural causes. Hollywood friends like Hope, Frank Sinatra, and Bing Crosby all paid for her funeral expenses... 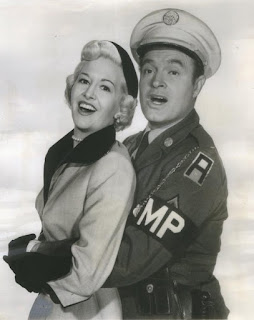 Posted by David Lobosco at 8:31 AM