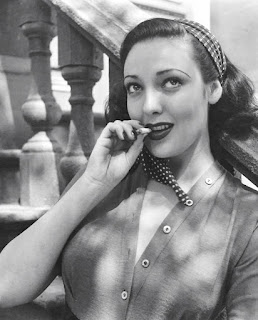 Fans of Linda Darnell know that she tragically died in a fire some 55 years ago in 1965. However, initial reports had her surviving. Here are is an article from the Madera Tribune of April 9, 1965, which gives some of the sad details of the horrific occurrence...

CHICAGO (UPI) —Actress Linda Darnell was critically burned early today when fire swept the suburban home of her ex-agent. Miss Darnell, 43, w’as rushed to Skokie Valley Community Hospital. Spokesmen said she suffered third degree burns over 85 to 90 per cent of her body. She w’as taken to surgery where a team of doctors worked on her. Ralph G. Hutchems, hospital administrator, said the surgery would take several more hours.

Miss Darnell was pulled from the burning home by firemen. Miss Darnell and Mrs. Richard Curtis, her former agent, stayed up late to watch a 1940 film, "Star Dust." which was being re-played on television. Miss Darnell starred in the film with actor John Payne. Spokesmen said the two women sat up after the film, smoking cigarettes downstairs on the sofa. Then thev went up to read in a second floor bedroom. Mrs. Curtis’ daughter, Patricia, 16, smelled smoke, and the three apparently headed for a stairway from the second floor bedroom. Mrs. Curtis and the daughter stopped to put wet towels around themselves. They said they thought Miss Darnell was with them. Instead, officers said, Miss

Darnell apparently continued on downstairs. She was found behind a sofa in the burned out living room, clad in pajamas. Mrs. Curtis told her dai ghter to leap from the second floor window, which she did. Mrs. Curtis crawled out on a bathroom ledge until firemen rescued her. A neighbor, David Mundhenk, 22. broke a window with a shovel but was driven back by the smoke. The fire department spokesman said the fire was believed, to have started in a large couch in the living room. Mrs. Curtis’ husband was not home at the time of the fire, authorities said. 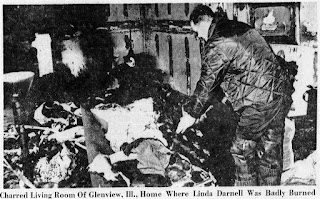 SOURCE
Posted by David Lobosco at 5:47 AM