THE MURDER OF CAROLE LANDIS 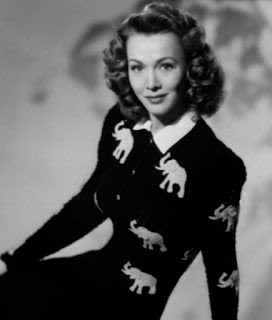 Here is a very interesting article written by Carole Landis' niece Tammy Powell. It poses an interesting alternate idea that Carole did not commit suicide. I have tried to get hold of Tammy Powell, but I have had little luck. If anyone knows of how to get in touch with her, let me know...

My beautiful Aunt Carole died in 1948 when she was only 29. The official story is that she committed suicide because her married boyfriend Rex Harrison would not marry her. I want you to know that my family has NEVER believed that it was a suicide. We are 100% convinced that Rex Harrison is to blame for her death. My grandmother Dorothy begged the police to investigate more but they refused. Desperate to find answers she hired a private detective. All he could tell her was that people were paid off and evidence was destroyed. The only person brave enough to come forward was Carole's secretary Nan Stuart who knew there was a cover-up.

We know that many things were taken from the house and that the lights in the bathroom were suspiciously turned off. Then there was a mysterious 2nd note which was never really explained. There are theories about what may have happened the night she died. Maybe Rex put secanol in Carole's food or drink without her knowing about. He knew about her past "suicide attempts" and thought no one would find it odd. He had been in the house a lot so he knew where the pills were. Another possibility is that Carole did threaten to kill herself as a dramatic gesture...something she had done in the past to get attention. She took the pills then called Rex to save her. He found her and instead of calling a doctor he just let her die. 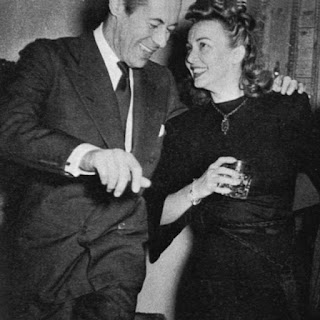 One of the myths that has circled around and then seems to bounce here and there and becomes such a focus is that Carole was manic depressive. I find it hard to believe she was. Yes, she had made a few attention grabbing suicide attempts but in those cases she would take aspirin and was always near someone who she knew would save her. I think this part of her personality came from her childhood. When she didn't get her way she threw a tantrum and she would get what she wanted. She was determined at such a young age and it might not have been the right way but it sure worked. She was a smart woman and knew how to make things go her way. Everyone has something they do to ensure themselves that they get what they want. We all choose our methods even if it's not always the smartest thing to do.

Another issue I have is this...if she was so depressed to attempt to kill herself or planned it then why would she go on a BIG shopping spree and plan a 4th of July party with her friends? I know from research that she wasn't broke - she had work coming up and was getting a big check from the sale of her house. She was smart enough to know that she shouldn't keep spending if she didn't have money. Also when she had a party she really knew how to do it right!!! She would put out a "feast to feed a village" (my grandmother's words) and she would be dressed up and would be the best hostess and always wanted everyone to enjoy and have fun.

She was in a bubbly and radiant mood that 4th of July weekend. Not one friend said that she was down and depressed. She even said she had "never been happier". Now, if she had stayed in the house, secluded herself from friends, and put on a fake smile it would be a different story. She was a great actress but by no means could you pull it off that well. Her friends would have known and at some point she would have shown her true emotions to someone. That night she was set on telling Rex that he need to keep his word to leave his wife or they were done. She wanted to have a normal relationship - marriage and children. I think that's what he promised her.

She even had her friends leave that evening because they knew he was coming over. If she was so down then she could have just had him come over without anyone knowing it and then proceeded to take her life. The real interesting thing is that from my training with suicide counseling I learned this - someone who really wants to take their life NEVER tells anyone about it. Yes, some leave a note explaining why but they don't reach out to anyone while they are doing it. Most who have called for help usually say they NEVER really wanted to in the first place. Carole just wasn't in the mind frame what so ever of someone who was going to do it. 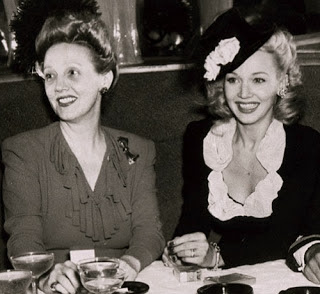 We know she made a phone call to her close friend Marguerite around midnight. IF she was taking pills at that time and really wanted to die she wouldn't have made the call. And it probably wasn't one of her "attention grabbers" due to the fact that she didn't call anyone else. Or maybe she did call Rex and she thought he was coming to the house to save her but he didn't. The fact that REX was the last to see her and the first to find her body is the key! There are many unanswered questions but all the facts we know about that night make him look very guilty. Aunt Carole's death has haunted my family for over 60 years and knowing Rex Harrison never paid for what he did only makes it worse. We may never know the entire truth about her death but will continue to investigate as much as we can. Carole didn't want to be remembered as a pathetic woman who died on the bathroom floor ... she deserves better. 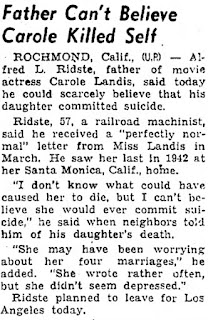 Before you believe Carole committed suicide consider the following...

1) Carole was very happy in the weeks before her death. She was going back to England to make a movie and had many plans for the future. Her maid Fannie said she was "happy as a lark" the day before her death.

2) Carole's other suicide attempts were never serious since she always made sure she was saved by friends. The "suicide note" that was found was undated so it could have been written any time. As a Catholic Carole believed she would go to Hell if she killed herself.

3) Rex was the last person to see Carole alive and the first one to see her dead. When Rex came to the house he told her maid Fannie that he thought Carole was dead. This was BEFORE they went upstairs and found the body!

4) After Rex found Carole's body in the bathroom he said he felt a pulse BUT instead of calling for the doctor or getting Carole help he just left the house. Where did he go?

5) Rex LIED to the police about his love affair with Carole saying they were just friends. He committed perjury when he testified they were not having an affair.

6) Several people saw a second note in the house but it mysteriously disappeared. We now know that Lilli Palmer paid a police officer $500 to destroy it. What did the note say?

7) When Carole's family arrived at the house it was a mess with drawers and cabinets open and papers thrown all over. Some of Carole's photo albums and personal diaries were missing. Did Rex try to get rid of evidence?

8) For years after Carole died newspapers reported there new clues in the case but the police continued to ignore the evidence. Then in the early 1950s Carole's police file mysteriously disappeared. Did someone pay the police to "lose" the file?

Carole's father Alfred Ridste never believed she killed herself. He said there were "secret pictures" that would prove she was murdered. Alfred also said that he found a book in Carole's bedroom that had an imprint showing that a letter had been removed from it. Here is a letter Alfred wrote in 1948 .. 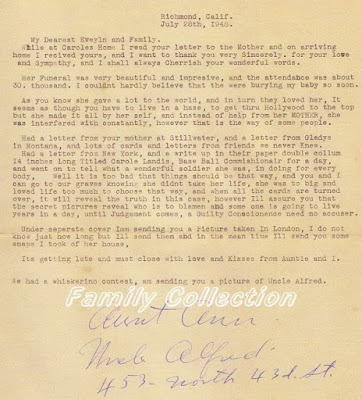