THE SUICIDE OF CAROLE LANDIS 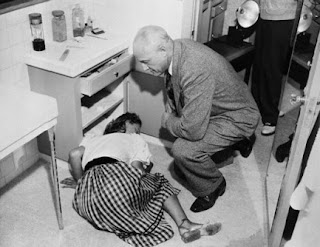 Carole Landis was a vibrant, beautiful 20th Century Fox starlet of the 1930s and 1940s. Starring in films like Moon over Miami (1941) or My Gal Sal (1942) with Rita Hayworth, she was a favorite pin-up during the World War II era.

Landis traveled overseas during World War II to entertain soldiers along with actresses Kay Francis, Mitzi Mayfair and Martha Raye; the basis of her book turned movie, Four Jills In a Jeep.

Unexpectedly Landis was found dead at 4 a.m. on July 5, 1948. It’s been ruled suicide by overdose of sleeping pills, but her family isn’t convinced. Here is the note she left her mother:

"Dearest Mommie - I'm sorry, really sorry, to put you through this but there is no way to avoid it - I love you darling you have been the most wonderful mom ever and that applies to all our family. I love each and every one of them dearly - Everything goes to you - Look in the files and there is a will which decrees everything - Good bye, my angel - Pray for me - Your baby" 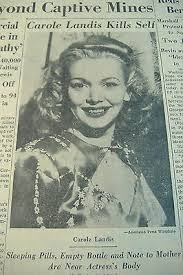 Carole Landis was discovered in her apartment after a lavish Fourth of the July party followed by an intimate dinner with actor Rex Harrison. Harrison and Landis had been involved in an widely known extra-marital affair. At the time, Harrison was married to actress Lilli Palmer. Landis and Harrison had broken up and recently gotten back together around the time of the party.Hollywood suicides are part of the town's lore. Landis's is more remembered than most, not for what Landis did, but for what those around her did. Harrison had been calling her throughout the morning but her maid had told him she wasn't awake. She wasn't going to disturb her employer, so Harrison dropped by himself, entered her bedroom and found Landis non-responsive. He felt her wrist and said he felt a faint pulse, but instead of calling an ambulance rifled through her address book, hoping to call her private doctor and thus keep the disaster under wraps. While he did that, Landis died. After failing to find the number he sought, he went home, called studio head Darryl Zanuck, and set about damage control. The maid, left to deal with the situation, asked a neighbor to call police.


It wasn't unusual for press to have access to death scenes, as we've documented frequently in our Naked City posts. Landis's death photo appeared on the fronts of hundreds of newspapers by the next morning. By then questions had begun to arise. Some said Landis had written a second suicide note that Harrison destroyed. When asked at a coroner's inquest whether there was a note, he said no. Her friend Florence Wasson said there was a second note, but it only asked that the cat be taken to the vet because it had a sore paw. The inquest was closed with no new findings, but years later a policeman who had been at Landis's house that day said he had seen a second note addressed to Harrison, and that the cat had seemed in perfect health.

Landis's family claimed Harrison was guilty of murder—and not just for dithering about when he thought he felt a pulse. They claim he killed her outright to keep news of his affair from damaging his career. However, his relationship with Landis was a poorly kept secret, and tabloids were making sly references to it, identifying Harrison and Landis by their initials. Also, Harrison already had a terrible reputation. People behave irrationally in high stress situations, and Harrison made bad moves at every stage, especially when one considers that there was no way he could hope to hide his involvement. But that shows merely cold-hearted concern for himself, and possibly a lack of awareness how near death Landis was. Add it all up and you have one of Hollywood's most storied suicides—one where an act meant to be a final answer left endless questions... 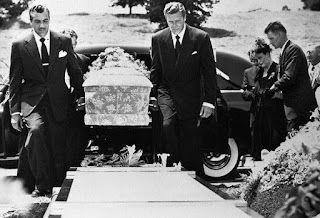