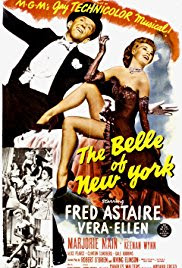 To start off our month of Vera-Ellen, here is the original review of the forgotten Vera-Ellen/Fred Astaire gem The Belle of New York (1952). This was written by Bosley Crowther and appeared in the NY Times of  March 6, 1952...


Add to the list of young ladies who have danced on the screen with Fred Astaire the name of Vera-Ellen and mark it with a star. For this agile and twinkling charmer, who accompanies the ageless Mr. A. in his latest if not his greatest Metro musical, "The Belle of New York," is as graceful and pleasing a dancer as any that has gone before, and she adds a considerable presence to this trifle at Loew's State.

And, believe us, a presence is needed, in addition to that of Mr. A., for little of any marked distinction is in evidence, outside the two stars. A couple of bright production numbers, including a series of Currier & Ives tableaux that have a beguiling sparkle in the Technicolor used; a couple of Johnny Mercer lyrics, attached to some Harry Warren tunes, and that is about the total—outside of Vera-Ellen and Mr. A. If it weren't for them and their dancing, "The Belle of New York" would be kaput.

As it is, the two nimble performers have just about all they can do to keep this slight musical moving for the brief hour and twenty minutes that it runs. Somehow the script about a playboy who falls wildly and buoyantly in love with a prim hallelujah singer on the sidewalks of gaslit New York is so thin and dramatically boneless that it couldn't possibly move from here to there on the strength of the trifling complications with which it is barely endowed or the mild incidental assistance of Keenan Wynn. Alice Pearce and Marjorie Main. 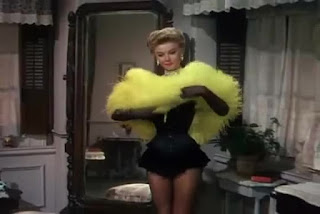 And so Director Charles Walters desperately calls upon his stars to remedy the vast emaciation with the frequent use of their muscular limbs, to which enterprise of salvation they apply themselves with a will. Together they cut some darling figures in those Currier & Ives tableaux, directed by Robert Alton in a cutely exaggerated style. A game of old-fashioned badminton is burlesqued with delicacy and grace and a gay figure-dance on an ice pond is actually done by the two on skates. Together they also scamper to a nice tune called "Baby Doll" and frolic all over a horse-car to a frivolous jingle called "Oops!" 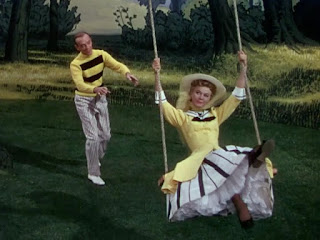 It is separately, however, that they deliver their best, to our taste—as if vyeing with one another in pedal dexterity. Mr. A. gets first go with a dizzying and reminiscent tap, in top hat and tails, while perched precariously atop the Arch in Washington Square. That is put in the shade by Vera-Ellen when she does a delicious pantomime, in opera-length hose and ruffled scanties, to the tune of "Naughty But Nice." And just when you're starting to pity the old master for being outclassed Mr. A. pops back in a honey of a soft-shoe sand dance that takes the prize. The title of the tune to which he does it? With pleasure: "I Wanna Be a Dancin' Man!"

But again, as we say, there's little cooking but Vera-Ellen and Mr. Astaire in this handsomely costumed, brightly lighted, dramatically empty film. Punning upon the nursery jingle, "The Belle of New York" has only toes. 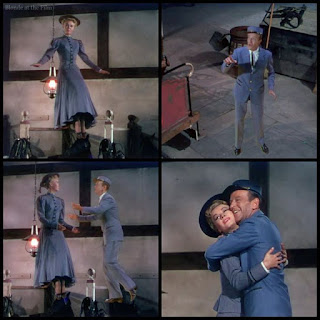 SOURCE
Posted by David Lobosco at 6:20 AM