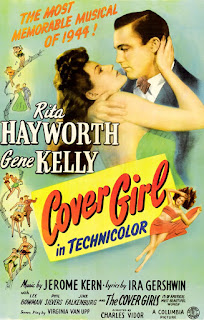 
' Cover Girl,' With Rita Hayworth and Gene Kelly, at the Music Hall -- 'Her Primitve Man' Is Seen at Loew's State Theatre
By BOSLEY CROWTHER

If there were still such a thing in existence as the proverbial "tired business man," then we'd say that the picture made just for him is at the Radio City Music Hall. For Columbia's expensive production (in Technicolor, of course), "Cover Girl," which came to the showplace yesterday as the cream of its Easter program, is precisely the sort of entertainment that used to fill his Broadway bill. Everything happens in it just when you most expect it to. The script is so frankly familiar that it must have come from the public domain. And the characters are as sleekly mechanical as only musical comedy characters dare to be. But it rainbows the screen with dazzling décor. It has Gene Kelly and Rita Hayworth to sing and dance. And virtually every nook and corner is draped with beautiful girls. 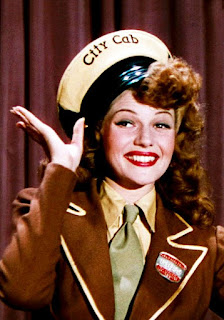 Further, this gaudy obeisance to divine femininity has some rather nice music in it from the tune-shop of Jerome Kern. Best of the numbers, both for listening and for watching a dance done thereto, is a rhythm entitled "Tomorrow," to which the principals and Phil Silvers cut a rug. The idea is that they are playmates associated in a Brooklyn night club, and this dance that they do along the quiet streets on their way home in the small hours is a pip. Another pleasant number to which Miss Hayworth and Mr. Kelly nip around is "Put Me to the Test"—an invitation which the script, unfortunately, does. 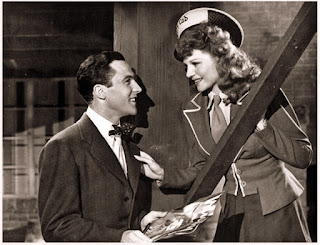 For this undistinguished fiction about a Brooklyn night-club girl who wins a "cover contest" conducted by a glamorous magazine is so handicapped with clichés that it looks like an obstacle course. What do you think happens when Miss Hayworth wins the contest? She becomes sensationally famous and quarrels with Mr. Kelly, her nice boy friend. And what do you think is her decision after she has been in a big Broadway show (just long enough to do one splurge number)? Go back to Mr. Kelly, of course!

To be sure, Mr. Kelly is a sweet guy and a delightfully able dancer, too, and Miss Hayworth does better with him than with any dancing partner she's had yet. (That comment includes Fred Astaire, whom Mr. Kelly is pushing for top rung.) Miss Hayworth even acts with an enchantment which she has never so capably turned on. But you would think that something better could be found for them to play than this script. You would think that more fun could be worked in than merely Mr. Silvers' corny gags. And, above all, you'd think that the producer, Arthur Schwartz, whose first picture this is, would have tried for something more original and cinematic than a straight "t. b. m. show"... 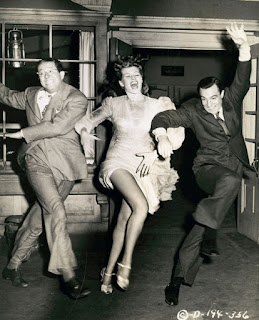 Posted by David Lobosco at 7:56 AM