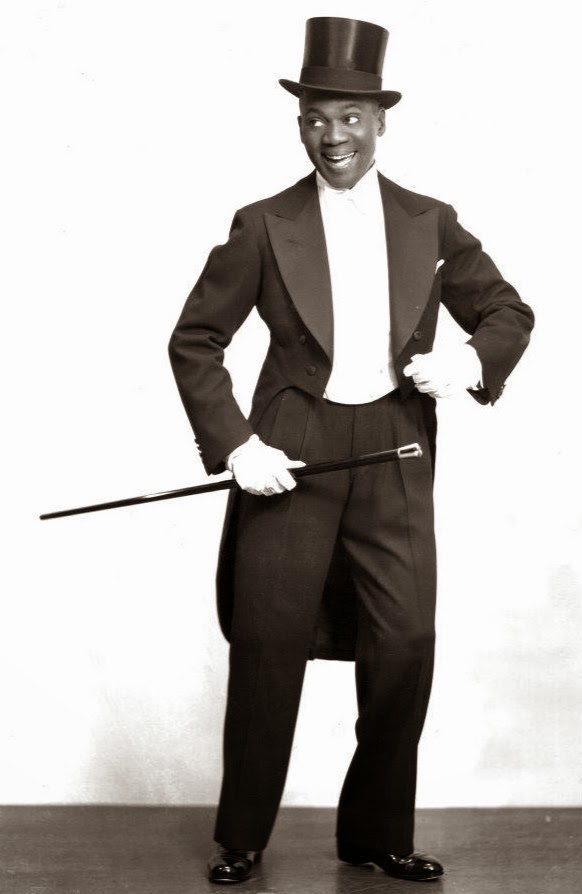 Many people do not truly know who Bill "Bojangles" Robinson was. He has been dead 65 years now, and most of his film roles were dated by the 1950s. However, Robinson was a gifted dancer, and like so many otherAfrican-American performers, he deserved to have been given better roles in the musicals. His long career though mirrored changes in American entertainment tastes and technology, starting in the age of minstrel shows, moving to vaudeville, Broadway, the recording industry, Hollywood radio, and television.

Robinson was born in Richmond, Virginia on May 25, 1878. His parents were Maxwell, a machine-shop worker, and Maria Robinson, a choir singer. His grandmother raised him after both parents died in 1885 when he was 7 years old—his father from chronic heart disease and his mother from natural causes. Details of Robinson's early life are known only through legend, much of it perpetuated by Robinson himself. He claimed he was christened "Luther"—a name he did not like. He suggested to his younger brother Bill that they should exchange names. Eventually, the exchange between the names of both brothers was made. The brother subsequently adopted the name of “Percy” and under that name achieved recognition as a musician.
In 1890, at the age of 12, Robinson ran away to Washington, DC, where he did odd jobs at Benning Race Track and worked briefly as a jockey. He teamed up with a young Al Jolson, with Jolson singing while Robinson danced for pennies or to sell newspapers. In 1891 he was hired by Whallen and Martel, touring with Mayme Remington's troupe in a show titled The South Before the War, performing again as a pickaninny, despite his age. He traveled with the show for over a year before growing too mature to play the role credibly.

In 1898 he returned to Richmond where he joined an army unit as a drummer when the Spanish–American War broke out. He received an accidental gunshot wound from a second lieutenant who was cleaning his gun.

On March 30, 1900, Robinson entered a buck-and-wing dance contest at the Bijou Theater in Brooklyn, NY, winning a gold medal and defeating Harry Swinton, star of the show In Old Kentucky and considered the best dancer of his day. The resulting publicity helped Robinson to get work in numerous traveling shows, sometimes in a troupe, more frequently with a partner, though not always as a dancer (Robinson also sang and performed two-man comedy.

When the U.S. entered World War I, the War Department set up a series of Liberty Theaters in the training camps. The Keith and Orpheum Circuits underwrote vaudeville acts at reduced fees, but Robinson volunteered to perform gratis for thousands of troops, in both black and white units of the Expeditionary Forces, receiving a commendation from the War Department in 1918. Throughout the early 1920s, Robinson continued his career on the road as a solo vaudeville act, touring throughout the country and most frequently visiting Chicago, where Marty Forkins, his manager, lived. From 1919–1923 he was fully booked on the Orpheum Circuit, and was signed full-time by the Keith in 1924 and 1925. In addition to being booked for 50–52 weeks (an avid baseball fan, he took a week off for the World Series), Robinson did multiple shows per night, frequently on two different stages.

Robinson’s film debut was in the RKO Pictures 1930 musical Dixiana. RKO was formed in part by a merger of the Keith and Orpheum theater circuits, with whom Robinson had performed as a headliner for many years. He was cast as a specialty performer in a standalone scene. This practice, customary at the time, permitted Southern theaters to remove scenes containing black performers from their showings of the film. Dixiana was followed by Robinson’s first starring role, in Harlem is Heaven (1932), the first film made with an all-black cast. The movie was produced in New York and did not perform well financially, leading Robinson to focus on Hollywood-produced movies after that.

The idea for bringing a black dancer to Fox to star with Temple in The Little Colonel was actually first proposed by Fox head Winfield Sheehan after a discussion with D. W. Griffith. Sheehan set his sights on Robinson, but unsure of his ability as an actor, arranged for a contract that was void if Robinson failed the dramatic test. Robinson passed the test and was brought in to both star with Temple and to teach her tap dancing. They quickly hit it off, as Temple recounted years later:

“Robinson walked a step ahead of us, but when he noticed me hurrying to catch up, he shortened his stride to accommodate mine. I kept reaching up for his hand, but he hadn't looked down and seemed unaware. Fannie called his attention to what I was doing, so he stopped short, bent low over me, his eyes wide and rows of brilliant teeth showing in a wide smile. When he took my hand in his, it felt large and cool. For a few moments, we continued walking silence. "Can I call you Uncle Billy?" I asked. "Why sure you can," he replied... "But then I get to call you darlin.'" It was a deal. From then on, whenever we walked together it was hand in hand, and I was always his "darlin." 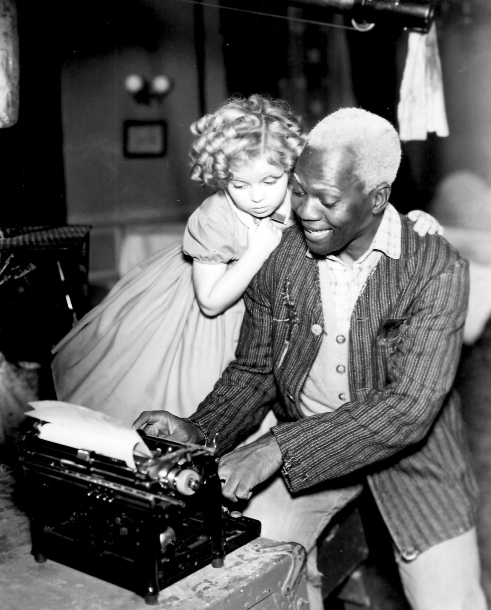 Robinson and Temple became the first interracial dance partners in Hollywood history. The scene was controversial for its time, however, and was cut out in the south along with all other scenes showing Temple and Robinson making physical contact. Robinson and Temple became close friends as a result of his dance coaching and acting with her. Robinson carried pictures of Temple with him wherever he traveled, and Temple considered him a lifelong friend, saying in an interview "Bill Robinson treated me as an equal, which was very important to me. He didn't talk down to me, like to a little girl. And I liked people like that. And Bill Robinson was the best of all.”

Robinson appeared opposite Will Rogers in In Old Kentucky (1935), the last movie Rogers made prior to his death in an airplane crash. Robinson and Rogers were good friends, and after Rogers’ death, Robinson refused to fly, instead travelling by train to Hollywood for his film work. Robinson’s final film appearance was a starring role in the 1943 Fox musical Stormy Weather. Lena Horne co-starred as Robinson’s love interest, and the movie also featured Fats Waller in his final movie appearance before his death, playing with Cab Calloway and his orchestra,. The Nicholas Brothers are featured in the film’s final dance sequence, performing to Calloway’s "Jumpin' Jive," in what Fred Astaire called "the greatest movie musical number he had ever seen". 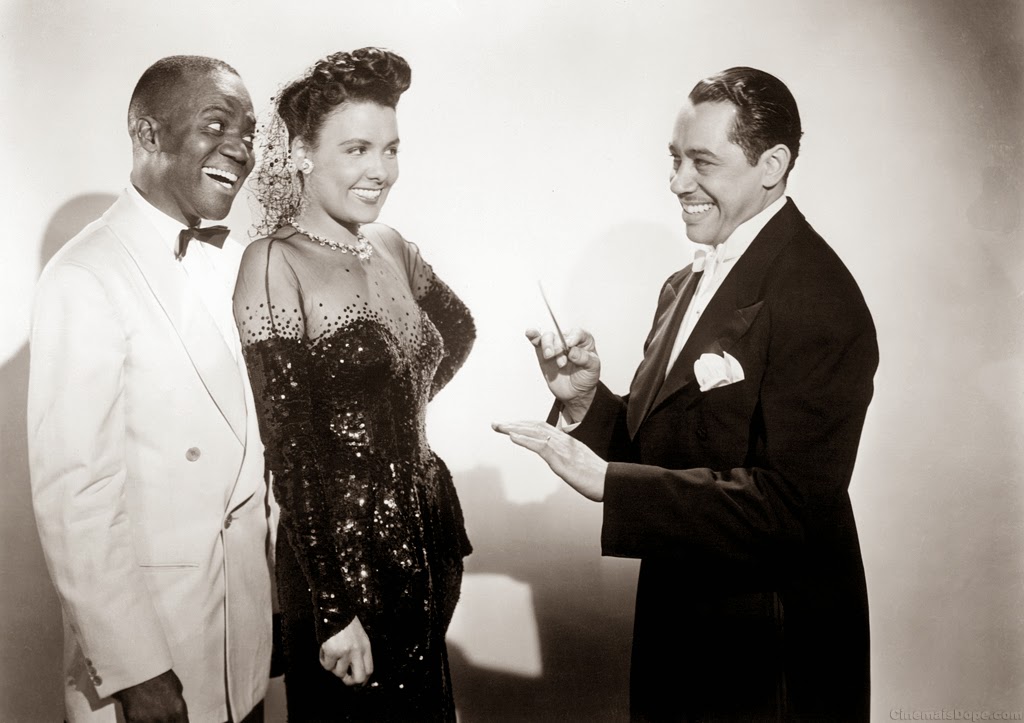 Robinson’s final public appearance in 1949, a few weeks before his death, was as a surprise guest on a TV show, Ted Mack’s The Original Amateur Hour, in which he emotionally embraced a competitor on the show who had tap-danced for the audience. A friend remarked, “he was handing over his crown, like him saying, 'this is my good-bye. '”

Despite being the highest-paid black performer of the first half of the twentieth century, earning more than US$2 million during his lifetime, Robinson died penniless on November 25, 1949, at the age of 71 from heart failure. He was married numerous times, but never had any children. His funeral was arranged and paid for by longtime friend and television host Ed Sullivan, co-star Shirley Temple, and fellow dancer Fred Astaire. Robinson's casket lay in state at the 369th Infantry Regiment Armory in Harlem, where an estimated 32,000 people filed past his casket to pay their last respects. The schools in Harlem were closed for a half-day so that children could attend or listen to the funeral, which was broadcast over the radio. Bill Robinson might not have gotten the recognition he deserved due to race relations in the 1930s and 1940s, but his dancing inspired a generation and influenced countless dancers to this day…

Posted by David Lobosco at 6:15 PM