I do not know what went through my head last month. Maybe it was getting all of the movie channels free from my new cable provider, but I got caught up on some of the recent movie comedies that have come out. I do like some modern movies, but not too many. It seems like modern comedies I can relate to more than any present day genre. However, the group of movies I viewed over the last month were not too great. There was no Young Frankenstein or Blazing Saddles in this bunch, but I still wanted to go over these slight movies briefly...


THIS IS THE END (2013)
Of all the comedies I saw, this one was the best. You have to know and get the comedy of Seth Rogen to get this film. Basically, all of these comedy stars play "themselves" at a party when the end of the world happens. I especially like Jonah Hill in this film. He is becoming a favorite of mine, and he has been nominated for an Oscar. The group looked like they had fun making the film, and although the story was far fetched, I laughed a lot.
my rating: 7 out of 10 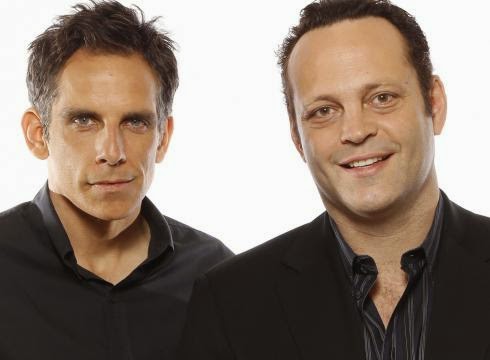 THE WATCH (2012)
I wanted to laugh at this movie the most, but it wasn't as funny as I thought it would be. I love Vince Vaughn and Ben Stiller together, and there are some great moments, but no laugh out loud spots. The story, another far fetched one, is about a neighborhood watch group that uncovers aliens trying to take over the world. Again, Jonah Hill steals the movies away, but this sci-fi comedy could have been better.
my rating: 6 out of 10


TED (2012)
This comedy I wanted to watch for almost a year, but I kept putting it aside. I shouldn't have wasted my time. I am a fan of Mark Wahlberg, and he is good at comedy (Check out The Other Guys). However, I expected too much of this movie about a man and his talking teddy bear (Seth MacFarlane). The movie was a big disappointment for me.
my rating: 5 out of 10


GROWN UPS 2 (2013)
I don't like Adam Sandler, but I always watch his movies. It is like I'm a battered woman who keeps on going back to an abusive husband. This movie is about grown up friends who deal with their aging as well as their kids getting big. It is a sequel to a somewhat better original comedy. However, the film proves to me there are no good comedy sequels.
my rating: 4 out of 10


THAT'S MY BOY (2012)
Another Adam Sandler movie...why do I do this to myself! In the film he plays an aging bum who has a kid when he was a student with his teacher. The less said about this flop the better. What is the real crime about this film is that James Caan and Susan Sarandon appear in it - what a waste of talent!
my rating: 2 out of 10


THE HANGOVER 3 (2013)
This is a 2nd sequel in a trilogy of comedies. The first one was pretty good, but the second two not so much so. There was exactly one laugh I had watching the whole film, and it was in the beginning. This movie should never have been made. This comedy almost made me cry, because after watching it - it would be 90 minutes of my life I would never get back!
my rating: 2 out of 10

Posted by David Lobosco at 3:57 AM