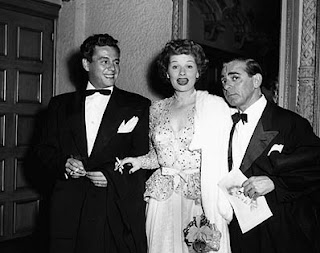 When 21 year-old Lucille Ball boarded a train in New York City in July, 1933, she was bound for California, where she was to appear in her first motion picture... Not just any picture -- "Roman Scandals," a major musical-comedy, produced by the legendary Samuel Goldwyn and starring Eddie Cantor. Cantor, she knew, was not only a star of stage, screen, phonograph records and radio, but one of America's most beloved entertainers.

To say that Cantor and Lucy met and became instantaneous friends would be an erroneous exaggeration. He was, after all, nearly 20 years her senior and an established star. She was a showgirl -- and a rank beginner, at that. "I was classified with the scenery," she later quipped. There was, however, an immediate affinity between the two performers.

Lucy let everyone know she was interested in doing more than this one picture... and that she felt desperately out of place among the beautiful Goldwyn Girls. When Cantor suggested one of the ladies be used in a comedy bit that would require her to get mud on her face, most of the Goldwyn beauties shrieked and ran the other way. Their face, they reasoned, was their fortune. Lucy, on the other hand, gladly volunteered. Her spirit and enthusiasm immediately endeared her to both Cantor and director Frank Tuttle. Cantor saw to it that in addition to her "showgirl" duties, Lucy was given a small part (with lines!) as one of the townspeople in the opening and closing segments of the film. Finally, Lucy's face was featured prominantly in many of the "Roman Scandals" publicity photos and print ads. All in all, not a bad beginning for the skinny kid from Jamestown. 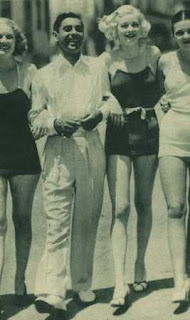 Lucy and Cantor worked together again a year later in Goldwyn's "Kid Millions." He was again the star; and she, alas, still part of the scenery.

Lucy spent the next ten years piecing together a film career, shuttling from Goldwyn to Columbia to RKO and finally to MGM. Cantor, meanwhile, found himself doing fewer and fewer films, and funnelled his boundless energies instead into his highly-popular weekly radio broadcasts. Indeed, when the opportunity presented itself for Cantor and Ball to work together again, it was in a radio studio:

In April, 1943, Cantor invited Lucy and her husband Desi to be a guest on his CBS program "Time to Smile." Dinah Shore was a regular on that series, as was announcer Harry Von Zell. World War II was underway, and Lucy and Cantor did a skit concerning the Hollywood Canteen. Fred Astaire made a special pitch encouraging people to buy War Bonds. (Cantor's grandson, Brian Gari, has made a recording of this April 28 broadcast available to fans on CD and cassette.)

Lucy and "Banjo Eyes" (as Cantor was affectionately known) got together again three years later on "Eddie Cantor Show," broadcast on NBC October 10, 1946.

Sadly the two old friends never had a chance to work on each other's television programs. Cantor's Colgate Comedy Hour was broadcast over NBC, and Lucy's I Love Lucy, of course, was on rival CBS. The two did get together for a special Ed SullivanShow telecast on June 24, 1956 -- Sullivan's 8th TV anniversary. Lucy and Desi hosted a special "remote" segment from Hollywood, in which a group of top stars stepped in front of the camera and wished Ed a happy anniversary. Cantor was one of those stars.

Seven months later, Lucy, Desi and Eddie were all guests on Jackie Gleason's "At 65" show (January 12, 1957), on which they performed in a comedy sketch about a lopsided birthday cake.

Lucy and Eddie also crossed paths numerous times socially and at Hollywood fundraisers. The two always spoke very highly of each other, she ever grateful that Cantor had given her encouragement (and extra screen time) at the very beginning when she needed those things most, and he happy that one of the "youngsters" had not only made good, but become a top star in her own right... 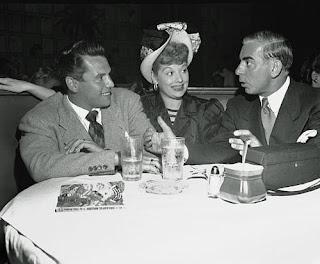 SOURCE
Posted by David Lobosco at 3:33 AM