Only Charlie Chaplin could be bold enough to film a silent movie during the heyday of sound in the early 1930s. By 1931, audiences wanted to hear Al Jolson sing in a movie or hear Boris Karloff groan as Frankenstein's monster. Although "talking" pictures were on the rise since 1928, City Lights was immediately popular. Today, it is thought of as one of the highest accomplishments of Chaplin's prolific career. Although classified as a comedy, City Lights has an ending widely regarded as one of the most moving in cinema history.

As in other Chaplin movies, each scene has an element of slapstick in it, using the comic scenes in a symbolic way. The opening scene uses funny sounds to depict the important mayor and his wife who are smiling and talking emphatically before the crowd. The revelation of the monument before the acting crowd, is actually the revelation of the tramp, the well-known Charlie Chaplin, before the movie-going crowd.

The Tramp, in every scene, barely escapes disaster of which he is completely unaware. Via the comic scenes, the Tramp is shown to be short, dirty and sloppy. His life is contrasted with good food, clean clothing, a large house, and comfortable and clean chairs, couches and beds. He is shown to be fearful of looking at or even dreaming of a better life.

In each encounter with the blind girl, played superbly by Virginia Cherrill (1908-1996), she unknowingly manages to bash the Tramp, throwing water in his face, dropping a flower pot on his head etc. He also shows the hardships and many times unbearable conditions of the lower class, via comedy, when the Tramp chooses to sweep the streets or sets himself up in the boxing ring. In the final scene, he happens to look in to the flower store, in a clear analogy to part of the opening scene where he is afraid to peer at the model doll of a woman in a dress shop. 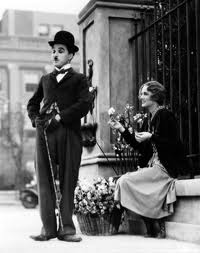 Slapstick is also used to show how the Tramp unknowingly insults and sometimes openly attacks various institutions and people, from mocking the mayor and police to bashing the stuck up butler or the snoopy neighbor.

Chaplin's feature The Circus, released in 1928, was his last film before the motion picture industry embraced sound recording and brought the silent movie era to a close. As his own producer and distributor (part owner of United Artists), Chaplin could still conceive City Lights as a silent film. Technically the film was a crossover, as its soundtrack had synchronized music, sound effects, and some unintelligible sounds that copied speech pattern films. The dialogue was presented on intertitles. 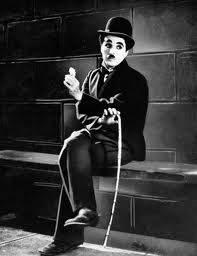 As a filmmaker, Chaplin was known for being a perfectionist; he was notable for doing many more "takes" than other directors at the time. At one point he fired Virginia Cherrill and began re-filming with Georgia Hale, Chaplin's co-star in The Gold Rush. This proved too expensive, so he re-hired Cherrill to finish City Lights. (Approximately seven minutes of test footage of Hale survives and is included on the DVD release; excerpts were first seen in the documentary Unknown Chaplin along with an unused opening sequence from the film.)

When Chaplin completed the film, silent films had become generally unpopular but City Lights was one of the great financial and artistic successes of Chaplin's career, and it was his personal favorite of his films. Especially fond of the final scene, he said, "[I]n City Lights just the last scene … I’m not acting …. Almost apologetic, standing outside myself and looking … It’s a beautiful scene, beautiful, and because it isn’t over-acted." 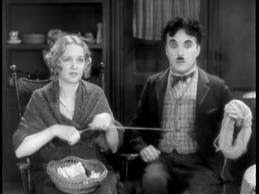 Some interesting trivia about the film: Charles Chaplin re-shot the scene in which the Little Tramp buys a flower from the blind flower-girl 342 times, as he could not find a satisfactory way of showing that the blind flower-girl thought that the mute tramp was wealthy. In terms of years, this film was Charles Chaplin's longest undertaking. It was in production from 31 December 1927 - 22 January 1931, over three years. It shot for only 180 days, though. At the beginning of the film, a town official and a woman dedicating the statue can be heard uttering nondescript words by way of a paper reed mouth instrument. The sounds were made by Charles Chaplin and this was the first time that his voice was heard on film.

On a personal note, it is one of my favorite Chaplin movies, and I recommend it to any young person wanting to experience a silent film. The key to a great silent movie is for it to draw the audience in to such an extent that one forgets they are watching a silent movie. City Lights is just that type of a movie...