MICKEY ROONEY: FROM SILENTS TO TALKIES 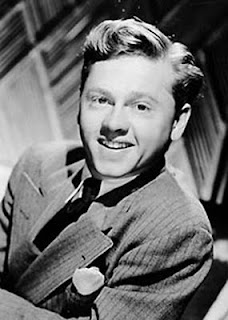 Mickey Rooney: All Singing! All Dancing! All Terrific!!!
BY JAY STEINBERG

The skill and professionalism honed onstage since he could walk, combined with an inimitable exuberance, made this diminutive Brooklynite Hollywood's hottest draw over his adolescence, and a welcome screen presence throughout a career that continues to infinity. The son of vaudevillians who divorced when he was four, Joseph Yule Jr. was doggedly pushed by his mother, who brought him to Southern California in search of film opportunities for the boy. He was only seven when he received his name-making opportunity, cast as pugnacious Mickey McGuire in a series of shorts based on the then-popular Toonerville Trolley comic panel. Though his mother unsuccessfully lobbied to legally change his name to that of the character, he adopted his familiar stage name instead, and would make over four dozen Mickey McGuire comedies over the ensuing eight years, which added into his lifetime output, totaled his appearances before the cameras at more than 300 times.

As the series wound down, Mickey signed with MGM, and began receiving supporting roles in features for the studio like his role as young Blackie in Manhattan Melodrama (1934) with Clark Gable and William Powell.

On loan to other majors, notably as Puck in Warner's version of Shakespeare's A Midsummer Night's Dream, at an amazing weekly salary of $500, he rubbed shoulders with some of the studio's top players, James Cagney, Olivia deHavilland, Dick Powell and Joe E. Brown. That same year he continued in small parts: in Little Pal with Ralph Bellamy and his role got slightly bigger in Ah, Wilderness, Eugene O'Neill's sweet-natured comedy. In 1936, he started to carry his weight in roles that suited him such as Little Lord Fauntleroy and in The Devil Is a Sissy, both in support of MGM's popular child star, Freddie Bartholomew.

His star rose in 1937 when he was cast in the MGM B-movie, A Family Affair, as small-town teen Andy Hardy. The response to the gentle middle-American farce spurred a string of immensely popular (and immensely profitable) low-budgeters following the travails of Andy and his family. In 1938, he went Out West with the Hardys and had some man-to-man talks with his on-screen dad in Judge Hardy and Son (1939). The prominence of Mickey's roles in the studio's A output grew as a result, as evidenced by his appearance in major motion pictures like Captains Courageous, in which he played Lionel Barrymore's son along side of Spencer Tracy, Melvin Douglas, but again in Bartholomew's shadow; Hoosier Schoolboy, also in '37, offered him a better role albeit at a lesser studio, Monogram Pictures. Thoroughbreds Don't Cry was his first teaming with Judy Garland, and the two struck up a friendship that would last a lifetime.

He got his biggest break in Boys Town (1938) when he shared top billing with Tracy. It was truly a role tailor-made for Rooney as he showed his dramatic talent, holding his own as misunderstood kid Whitey Marsh. Tracy won the Best Actor Academy Award as Father Flanagan and MGM followed it up with a sequel, Men of Boy's Town in 1941; As the lead star of The Adventures of Huckleberry Finn (1939) he got into one scrap after another as Mark Twain's young adventurer. When he was top-billed as Young Tom Edison in 1940, he convinced audiences he actually was the character.

MGM also re-teamed him with their other emerging adolescent star, Judy Garland, in a well-received series of black-and-white musicals kicked off by Busby Berkeley directing them in Babes in Arms, which garnered him his first Best Actor Oscar nomination, and became the first teenager in history to be nominated for that honor. Next, Mick and Judy's high school band was out to nab an award in Paul Whiteman's national radio contest, in Strike Up the Band (1940). 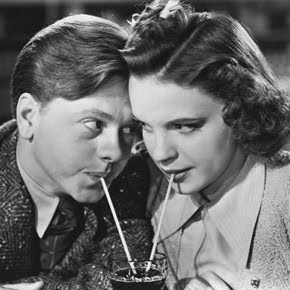 Rooney and Garland were together again in Babes on Broadway (1941), and this time they're out to put on a show on the Great White Way. And, Rooney is sent to a small private school to mend his Girl Crazy (1943) ways but once he sees Garland, it's love at first sight in this musical-comedy based on the Gershwin Broadway hit. As a telegram delivery boy during WWII, he matched wits with Frank Morgan and James Craig in The Human Comedy, recieving his second Academy Award nomination, and remaining a personal favorite of his films. Sprinkled between these major films, he put in his time into the Andy Hardy films as the public wanted more like: Andy Hardy Meets Debutante (1940); and Life Begins for Andy Hardy (1941).

National Velvet paired him with Elizabeth Taylor in 1944 and another lifelong friendship began. It was Rooney's final project before he put in for his WWII service; the 26-year-old Bronze Star winner returned to find his career transitioning all-too-quickly to character parts. His early itinerary included a final Hardy film, Love Laughs at Andy Hardy (1946); Killer McCoy (also in '46) finds Rooney giving a stunning performance as a feisty boxer in a knockout remake of MGM's 1938's The Crowd Roars; and a last pairing with Garland along with a host of MGM musical stars in Words and Music (1947), loosely based on the lives of songwriters Richard Rogers (Tom Drake) and Lorenz Hart (Rooney). He was comfortable with co-star Gloria DeHaven in Summer Holiday, the remake of O'Neill's comedy turned into a musical, also in '47.

Through the '50s, the work was always there to be had, although the quality fluctuated; notables included the high-torque drama The Big Wheel (1949), Mick is determined to follow in his racer dad's tracks leading to tragedy and hard lessons learned. In Quicksand (1950), Rooney is a young man who commits a minor criminal act that slowly, inexorably draws him into a quagmire of crime and self-destruction. Also in '50, with thanks to nationwide interest in a new sport seen on the early days of television during the late '40s and early '50s, he entered the world of roller derby quite convincingly in The Fireball, as a big-time skater-with an ego to match-until he's stricken with polio. Marilyn Monroe had an early role as a derby groupie attracted to Rooney, and Pat O'Brien plays, of all things, a caring priest.

My Outlaw Brother (1951) followed and brought Mick into the Western genre and in Off Limits (1953) Mick was back in the fighting game, this time strictly for laughs with Bob Hope and Marilyn Maxwell. Bridges At Toko-Ri (1954) found him in the Korean War listed as 4th billing after co-stars William Holden, Grace Kelly and Fredric March; as well as his eponymous NBC sitcom, also known as Hey, Mulligan (1954-1955). The Bold And The Brave (1956) and Baby Face Nelson (1957) followed and he found time to do the final movie in the Francis the Talking Mule series, Francis in the Haunted House at Universal when Donald O'Connor refused to do another one; Mick made himself available to TV, and his Emmy-nominated work on the Playhouse 90 episode The Comedian is a standout. In the upbeat wartime comedy, Operation Mad Ball (1957), he's a very resourceful supply sergeant co-starred with Jack Lemmon and Ernie Kovacs. And as it was inevitable, he made the final appearance as Andy Hardy in 1958's Andy Hardy Comes Home.

The '60s were notable for his copious TV work marked by Requiem for a Heavyweight, his well-received turn as Anthony Quinn's trainer. In 1961 he appeared in two movies: King of the Roaring 20s had him second billed as crooked Arnold Rothstein's equally crooked partner and caused a lot of talk when he got all the politically incorrect laughs as Audrey Hepburn's Japanese neighbor in Breakfast at Tiffany's, but it was mostly TV work that kept him going. 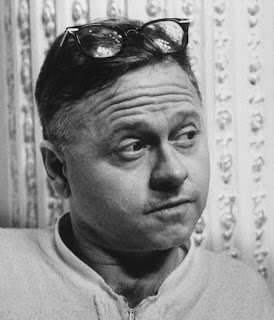 In 1963, he got a chance to work with Spencer Tracy again in Stanley Kramer's riotous comedy classic, It's a Mad Mad Mad Mad World, and was a demolitions expert in Roger Corman's The Secret Invasion in '64, along with Stewart Granger and Raf Vallone. He starred opposite Lex Barker and Walter Slezak in 24 Hours to Kill (1964), then ied his hand at another TV series simply called Mickey (1964-1965) and wanting to keep working, he found himself hamming it in a "guest" starring appearance in How to Stuff a Wild Bikini (1965). TV work became his most marketable commodity and he continued to be called upon for both live action and animated shows and was happy to lend his voice to the now classic family animated hit, Santa Claus Is Coming t Town (1970).

The '70s were marked by colorful character roles. In Pulp (1972), in which he managed to be second billed, he's a kooky agent helping Michael Caine write his memoirs. Also in '72, he starred in the hilarious Evil Roy Slade, along with some the era's most competent comedy performers, following with yet another animated movie to become a classic, The Year Without aSanta Claus. It might have been his sincere appearance as co-host in MGM's That's Entertainment (1974) that brought him to the public eye but he never lacked for work afterwards.

Continuing into the '80s with his Tony-nominated Best Actor run in the Broadway revue Sugar Babies with another lifelong friend from his days at MGM, Ann Miller. In 1981, he appeared as a mentally handicapped man in his Emmy-winning effort telefilm Bill, followed two years later with a sequel, Bill On His Own. And in 1983, he got a standing ovation when he received his 1983 Lifetime Achievement Oscar. Full of Rooneyisms, he once said, "There may be a little snow on the mountain, but there's a lot of fire in the furnace!"

The years that followed continued to be full with bountiful episode, TV movie and animation work, personal appearances and tours, and the occasional big-screen opportunity such as Babe: Pig in the Big City (1998); 2006's Night at the Museum, in which he plays one of the bad guys trying to foil Ben Stiller; and a cameo in 2011's The Muppets. 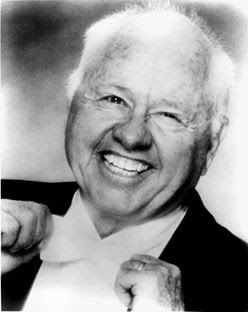 Being in the spotlight is never easy and Mick had his ups and downs but it's his honesty and great resilience that have endeared him to his legions of fans around the world. Mickey holds the record for being in the movie business longer than any other actor: as of 2011, he was still going strong at 85 years in films -- and is the only surviving movie star to have been in silent films and continued to perform into the 21st century...

SOURCE
Posted by David Lobosco at 5:47 AM