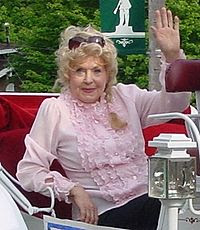 The actress who played tomboy Elly May Clampett on 1960s television show "The Beverly Hillbillies" has settled her lawsuit against Mattel over a Barbie doll based on her character.

Actress Donna Douglas, now 78, sued the toy company in May as well as the consumer products division of CBS Corp. seeking a minimum of $75,000 in damages.

Her complaint said Mattel was "engaging in the unauthorized use" of her name, likeness and image to promote and sell the "Elly May" Barbie.

Attorneys in the case filed court papers on Tuesday in Louisiana indicating the lawsuit had been settled. The financial terms were not revealed

Douglas starred in "The Beverly Hillbillies" which ran from 1962 to 1971 on CBS television. She played the beautiful but naive Elly May Clampett, in the show about a family that struck oil and ditched their backwoods home for life in California.

Philip Shaheen, an attorney for Douglas who now lives in Louisiana, said he could not comment on the details of the settlement. California-based Mattel could not be reached for comment.

CBS Consumer Products had argued in court papers that it had exclusive rights to use the Elly May character, and did not need Douglas' permission before entering into an agreement with Mattel for the doll...

SOURCE
Posted by David Lobosco at 7:03 AM