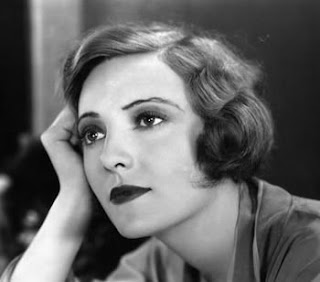 A Short Career in Lurid Hollywood
By DAVE KEHR

DOROTHY MACKAILL may be having her moment. When this British-born actress, a star in silent films and early talkies, died in 1990 at 87, she merited only a 153 word obituary in The New York Times. And the unsigned article didn’t even mention the movie most responsible for her current revival: “Safe in Hell,” a 1931 melodrama that seems remarkably lurid and sordid even by the loose standards that prevailed before Hollywood began enforcing the production code with vigor in 1934.

Playing a world-weary New Orleans “escort” with bags beginning to appear beneath her wide-set eyes, Mackaill’s Gilda reports to a hotel room for a job, only to find that her client is the married man (played by the professional heel Ralf Harolde) whose betrayal landed her in her current position. “You don’t think I’d drink with you, you son of a —— ” Gilda says, interrupting her epithet to knock a glass of hooch out of his hand. (“Hey, that cost 10 a quart!”) He puts the moves on her anyway, forcing Gilda to coldcock him with the heel of her shoe. As she flees the room, it catches on fire — and Gilda, assuming that she’s killed him, packs her bag and heads for a Caribbean island without an extradition treaty.

Gilda may be safe from prosecution in her island refuge, but she’s also the only available woman in a fleabag hotel otherwise populated by a collection of lecherous reprobates, who make a morning ritual of lining up their wicker chairs to watch her descend the stairs. It’s a situation that can’t end well, and it doesn’t under the blunt and forceful direction of William A. Wellman, who drives the film to its stunningly bleak conclusion in a thrifty 73 minutes. 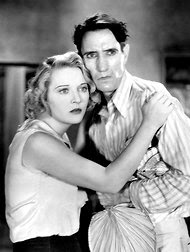 None of these films is as striking as “Safe in Hell,” but all give evidence of an engaging performer with a strong, self-reliant attitude toughened by the rough pragmatism of the early Depression years. In “The Office Wife” Mackaill plays a secretary in a publishing firm who unhesitatingly allows her skirt to ride above her knees to attract the attention (and eventually affection) of Lewis Stone, as her stuffy, considerably older employer. (The film is based on a novel by Faith Baldwin, who specialized in workplace romance.) In “Party Husband” she’s a young married whose “modern marriage” (to the bland James Rennie) allows her to stay up all night drinking coffee with her employer (Donald Cook) — yet another publisher who values her strong story sense.

Mackaill seems to have had a strong independent streak of her own. Born in a drab port city in Yorkshire, she ran away at 13 to London, where she found work as a chorus girl. She soon rose to featured parts in revues in London and Paris — her hoofing skills and broad-shouldered, athletic body are on display in the 1930 Michael Curtiz musical “Bright Lights,” which occasionally surfaces on TCM — and by 1920 she was in New York City, where she appeared in Ziegfeld’s “Midnight Folly” and opposite the popular comedian Johnny Hines in a series of two-reel shorts, before going to Hollywood to work for First National Pictures.

It’s here that film history breaks down, as it so often does when dealing with silent movies, because of the vast amount of material that has been lost, a curse that particularly afflicts second-tier stars like Mackaill. By all accounts she soon found her niche as a light comedienne with a naturalistic style, specializing in that new breed of professional woman — shop girls and secretaries — that was emerging during the 1920s. She worked with some of the period’s leading directors of romantic comedies, including William A. Seiter and Alfred Santell, and was paired with the engaging (and unjustly forgotten) Jack Mulhall for a series of 10 films, urban romances like Santell’s “Subway Sadie” and “Just Another Blonde,” both from 1926.

But sound changed Mackaill’s career. Although she had managed to lose her Yorkshire accent, her voice recorded as raspy and hard in her part-talkie debut, “The Barker” (1928), in which she played a hard-bitten carnival girl. At 25, her ingénue days were over — just as well, as it turned out, because sound and the stock market crash had introduced a new element of embittered realism to the movies.

Mackaill’s talkie career seems, in a way, a long farewell to the optimistic career girl of the ’20s: now there were compromises to be made in the workplace, lecherous bosses to be dealt with and jealous fiancés to be left behind. In “The Office Wife” Mackaill has a younger sister, played by a voluptuous Joan Blondell in her feature debut, who feels no qualms about living off men, and can’t understand her sibling’s reluctance. “Safe in Hell” may be far more sensational in its details, but it seems almost prudish in its portrayal of its heroine’s moral degradation; in “The Office Wife,” as in so many films of the precode period, getting by means sleeping around.

When Warner Brothers took over First National, Mackaill became one of several stars whose contracts weren’t renewed. She freelanced for a while, slowly slipping down the list of independent studios, from Columbia (where she made “Love Affair,” playing a dissolute socialite who finds salvation with an idealistic young aviator played by a pre-Bogie Bogart), to the Poverty Row outfits Allied (“Picture Brides,” 1933) and Liberty (“Cheaters,” 1934). She returned to England for one last film, “Bulldog Drummond at Bay,” in 1937, and eventually settled in Hawaii, where, after divorcing the last of her three husbands in 1938, she lived out her years as a sort of celebrity in residence at the Royal Hawaiian Hotel in Honolulu...

SOURCE
Posted by David Lobosco at 5:20 AM