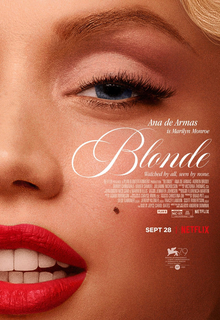 I think I have only stopped watching a movie two or three times without finishing it. Even the worst movies like Jaws 3, I am usually able to suffer through. However, for the Marilyn Monroe biography Blonde, which was shown on Neflix, I had to turn it off. It is an unwatchable piece of film garbage. The film is a fictionalized take on the life and career of American actress Marilyn Monroe, played by Ana de Armas. The cast also includes Adrien Brody, Bobby Cannavale, Xavier Samuel, and Julianne Nicholson.

Along with shifting aspect ratios, most of the film is presented in black and white. Dede Gardner, Jeremy Kleiner, Tracey Landon, Brad Pitt, and Scott Robertson produced the film, which, after a lengthy period of development that began in 2010, entered production in August 2019 in Los Angeles. Production wrapped in July 2021, following the COVID-19 pandemic in 2020. The film also garnered controversy and notoriety for its lead casting, graphic sexual content, and status as the first NC-17-rated film to be released via a streaming service.

Blonde premiered at the 79th Venice International Film Festival on September 8, 2022, and began a limited theatrical release in the United States on September 16, 2022, before its streaming release on September 28, by Netflix. The film received mixed reviews from critics, with De Armas's performance being praised, while Dominik's depiction of Monroe's life was criticized as being exploitative, sexist, and dehumanizing. 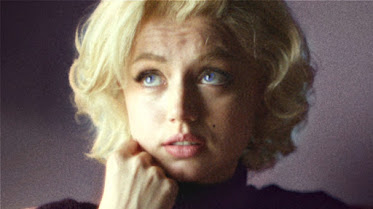 Real footage from Monroe's filmography is used in this movie mixed in with scenes recreated by Ana de Armas, who was placed in the films All About Eve (1950), Don't Bother to Knock (1952), Niagara (1953), Gentlemen Prefer Blondes (1953), and Some Like It Hot (1959). Andrew Dominik said that he initially didn't get permission from MGM to use footage from their films, so he had to shoot backup versions, such as for the scene with de Armas and Tony Curtis in Some Like It Hot, which he shot with an actor playing Curtis in case he couldn't get permission to use the original footage. Dominik was allowed to use the footage after an MGM executive got fired and was replaced by Michael De Luca, who finally gave him permission to use it.
The only good part about this movie was Ana de Armas as Marilyn Monroe. She was perfect in the role, but the plot is horrible, and the movie was graphic just for the sake of being graphic. Don't waste your time on this horrible film. It will be 166 hours of your life that you will never get back...
MY RATING: 2 OUT OF 10 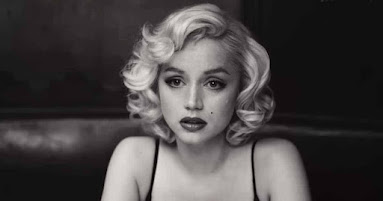