THE FINAL WORD ON YLENIA CARRISI 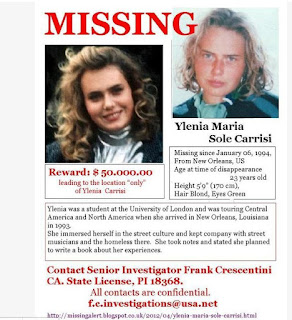 While searching for updates on the disappearance of Tyrone Power's granddaughter 25 years ago, I came across this story by the investigator from 2017...

I still receiving many e-mails from different part of the world in different languages in reference to Ylenia Carrisi case,and once for all I will make this statement I will NOT give out ANY information on Ylenia case. And this is the last time that I will give you my final report on this case, therefore read it very careful with an open mind and I am sure you will get the answer to your question's.:

Getting lost in New Orleans has long had a certain cachet. The people who lives there saying the city is unique, the food spicier, the music livelier, the mysteries stranger. But the mystery of Ylenia is distinctive even by New Orleans standards.


The main characters are a former American matinee idol's granddaughter and a mesmerizing street musician. The scene is the waterfront and the streets of the French Quarter. Swirling in the background is the blend of Spanish, French and African cultures that has drawn writers like Lafcadio Hearn and William Faulkner and apparently Ylenia working on her book.

The Italian news media, which has recounted every twist of the mystery on newscasts and in newspapers news full of incorrect information’s and defamatory accusation’s including a possible sic relation with Masakela and the uses of narcotics from Ylenia all shallow low blows to increment the sale of a magazine. In addition they (Italian Media) even hinted of voodoo. Semi celebrity in Italy, simply horrible individuals like GENTE, STOP, CHI L’HA VISTO and the surrounding sharks in the picture like Roberto Fiasconaro only there for the news and the $.

Ylenia Carrisi, a 23-year-old blonde with green eyes, disappeared on Jan. 6, a week after arriving in New Orleans, leaving behind her passport and some baggage. That night A young woman, whose body has never been found, jumped into the Mississippi River at the edge of the French Quarter and vanished. The questions she left behind are still unanswered. 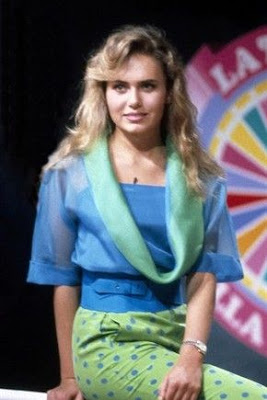 Ylenia is a minor television celebrity in Italy, for a short time a counterpart of Vanna White on an Italian game show. But she is best known as the daughter of two Italian singers, Al Bano and Romina Power, and as the granddaughter of the American actor Tyrone Power and his actress wife, Linda Christian.

Ylenia and her parents came to New Orleans on vacation last July, says Fabrizio Mazza, the Italian Consul in New Orleans, and Ylenia meat again street musician, Alexander Masakela, a 54-year-old cornet player Individual that already meet the Carrisi and Ylenia in Italy at the Carrisi city of Cellino with a Jamaican accent. Enchanted by the city and apparently by Masakela, Ylenia stayed behind when her parents went on to Florida, saying she wanted to continued write her book.

According to our investigative discovery Ylenia rushed to Florida two days later, telling her parents that she feared that two men were trying to drug and kill her.

Nevertheless, Ylenia, who was on leave from her studies at the University of London, returned to New Orleans on Dec. 30. Our investigative discovery quoted that Romina as saying that her daughter wanted to "find characters for a book she was writing." And no fear for her daughter to return after Ylenia clearly stated “two men trying to drug me and kill me” No Police report nothing!!

Then Ylenia mingled with street musicians and the homeless, and took notes. She stayed with Masakela in a scruffy hotel on St. Charles Street, five blocks from the French Quarter, where Masakela played his cornet for donations.

Mike Stark, who owns a French Quarter mask and hat store called The Little Shop of Fantasy, said that some homeless people he knows told him that Ylenia worked "very hard at being a street person."

On Jan 6. At 11 P.M., A young woman jumped into the Mississippi River near the Aquarium of the Americas, on the edge of the French Quarter. Shortly before, she had told a security guard, Albert Cordova wearing very thick vision glasses “I belong in the water." The woman swam through the fast brown currents about 100 yards toward the middle of the river.

A barge then came by, making waves. The woman screamed for help and then vanished. The Coast Guard searched 90 miles of the river, almost to the Gulf of Mexico, and found only the body of an unidentified man.

The security guard, Albert Cordova, has uncertainly identified photos of Ylenia as depicting the woman who spoke to him.

According to our investigations and interview’s local residences told us there is a magic about that river. People who've been drinking too much can believe, 'I can swim that damn thing.' "
Ylenia parents last heard from their daughter on Jan. 1, and despite her deceptive drowning, they say they fear she is being held hostage. Why?? 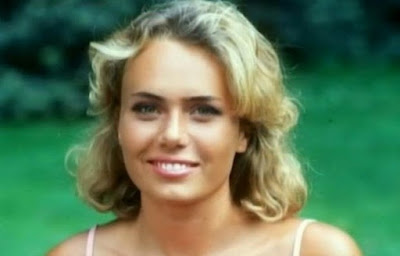 On Feb. 18 they issued a statement from Switzerland, saying, "The investigations to find our daughter alive, and probably held against her will, are actively being pursued." It also said "there have been numerous and reliable sightings worthy of pursuit." That very week, for example, came an unconfirmed report that Ms. Carrisi had been seen in St. Augustine, Fla. But an NCIC was issued to Ylenia Maria Sole Carrisi that # M705944984 number that later on will disappeared.

Masakela has not been accused of any wrongdoing, but Ylenia parents say they are suspicious of him. He had "some kind of power over her, Romina said at a New Orleans news conference after her daughter vanished.

Masakela has no official address and has proved elusive in recent weeks, but in an interview he said Ylenia "I believe she is safe."

The police say only that the investigation is continuing as an inactive case!

During our investigations in New Orleans we interview many residents, who note that it would not be the first time a stranger has come to the city and disappeared from her previous life.

AXJ MEMBER and CEO in charge of Cold Cases, Missing Children or Adults 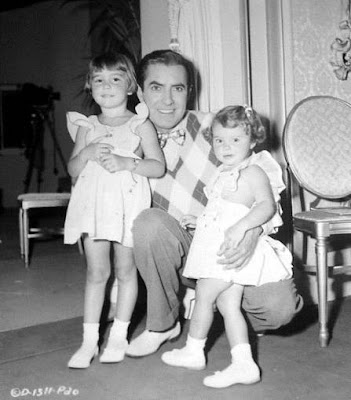 SOURCE
Posted by David Lobosco at 9:06 AM