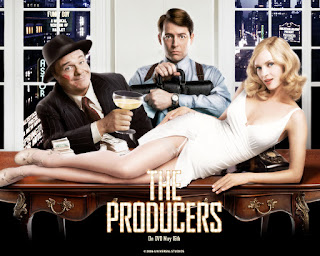 This 2005 movie musical version of The Producers remains to be overshadowed by the 1968 original comedy starring Zero Mostel and Gene Wilder, and rightfully so. The 1968 is a masterpiece of film comedy. However, this 2005 version is great in its own way. I had the pleasure of seeing this film in the movie theater, and my wife and I both enjoyed it. My wife at one point said she felt like applauding after one of the musical numbers.

This film is an adaptation of the 2001 Broadway musical, which in turn was based on the 1968 film of the same name starring Zero Mostel, Gene Wilder, and Andreas Voutsinas. It was produced and distributed domestically by Universal Pictures and distributed overseas by Columbia Pictures.

The flop musical "Funny Boy" (based on William Shakespeare's Hamlet) opens – and closes ("Opening Night"). Afterward, Leo Bloom (Matthew Broderick) arrives at the office of the show's washed up producer, Max Bialystock (Nathan Lane). Max has hired Leo Bloom as his accountant. While studying Max's books, Leo inadvertently inspires Max to gain more money with a flop than a hit by putting on a show that is certain to fail at the box office after collecting an excessive amount of money from their backers and cleverly changing their accounts, leaving them with $2,000,000 to spend. At first, Leo refuses to participate. Max, who cannot change the books himself, attempts to coax Leo into the scheme ("We Can Do It"), but Leo still refuses and returns to his old accounting firm, Whitehall & Marks.

After being chastised by Mr. Marks (Jon Lovitz), Leo fantasizes about being a Broadway producer ("I Wanna Be a Producer"). Realizing that he wants to get into the world and take this risk, Leo quits his job and, with Max, forms Bialystock & Bloom. Max and Leo search for "the worst play ever written" and discover Springtime for Hitler, written by an ex-Nazi named Franz Liebkind (Will Ferrell). They are coerced into performing Adolf Hitler's favorite tune and swearing the sacred "Siegfried Oath" in order to gain Liebkind's signature for Broadway rights to the musical ("Der Guten Tag Hop-Clop"). They solicit a flamboyant gay director, Roger De Bris (Gary Beach) ("the worst director in the world") and his faithful theatrical companion, Carmen Ghia (Roger Bart), to direct and choreograph the play. Roger initially refuses saying that the musical is far too dark and gritty and that Broadway needs to be more "gay" ("Keep It Gay"). He is talked into it, however, after being enticed by Max and Leo, who tell him that if he directs the play, he is certain to win a Tony. Then, Ulla (Uma Thurman), a beautiful Swedish woman, appears at their office for casting despite there being no auditions. Max insists on hiring her as their secretary and auditioning her ("When You've Got It, Flaunt It"). 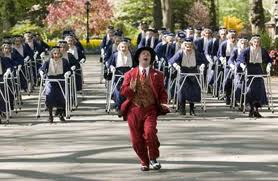 To gain the finances for the musical Max has dalliances with every old lady across town ("Along Came Bialy"). Max and Leo return to the office to discover that Ulla has redecorated it to be entirely white. After Max leaves, Leo laments about Ulla and the dangers of sex straying him from his work, but the attraction between them nevertheless culminates in a kiss between Leo and Ulla ("That Face"). Later, at the auditions for the role of Hitler, Franz becomes angered at a performer's rendition of Hitler's favorite German song. Franz storms the stage and sings the song the correct way ("Haben Sie gehört das Deutsche Band"). Max hires Franz to play Hitler.

On opening night, as the cast and crew prepare to go on stage, Leo wishes everyone "good luck", to which the players are horrified. They explain to Leo that it is in fact "bad luck" to say "good luck" on opening night and that the correct phrase is to say "break a leg" ("You Never Say Good Luck on Opening Night"). Franz leaves to prepare and, in his rush, literally breaks his leg. Max enlists Roger to perform the role in his place, and Roger accepts. 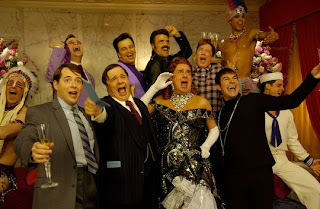 As the show opens, the audience is horrified and begins to walk out until Roger steps on stage as Hitler. Because his performance is so flamboyant, the audience misinterprets the play as an anti-Nazi parody and a mockery of Hitler rather than Franz's original vision ("Springtime for Hitler"). As a result, the show is a success and the IRS will be keeping tabs on Max and Leo. After the show, an angry Franz starts trying to shoot the producers for, despite his show being a hit, making a fool out of Hitler and broken the "Siegfried Oath". However, the police arrest him after hearing the shots, but not before he breaks his other leg while trying to escape. Max, too, gets arrested for his tax fraud. Leo hides away from the police, and Ulla finds him hanging on a coat hanging rod; then, they escape to Rio de Janeiro ("Betrayed"), but they return to stand up for Max in court when Leo realizes that Max is the one person who has ever shown him any degree of respect ("'Til Him"). The judge sentences them both to five years at Sing Sing, but they and Franz are pardoned by the Governor after writing a musical in prison ("Prisoners of Love"). At the end, they go on to become successful Broadway producers.

The movie did not do well in theaters, but if you were a fan of good Broadway tunes and great movie musicals then check this film out. Hollywood has sort of forgotten how to do an old fashioned movie musical, but Mel Brooks did an excellent job transferring his Broadway hit to the screen. I am a huge fan of Nathan Lane and I enjoy Matthew Broderick to a lesser extent. Uma Thurman shocked me more than anybody with her musical and dancing ability, and her number "If You Got It, Flaunt It" is one of my favorite moments in the film. The movie does tend to drag in the end, but if you are a fan of Mel Brooks or The Producers or good show stopping numbers then this movie is for you. I never thought I would be singing a song in the shower about Adolf Hitler until I saw this musical... 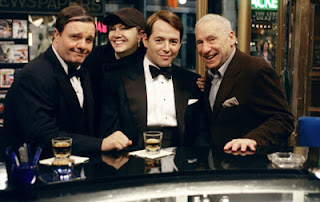 Posted by David Lobosco at 3:43 AM