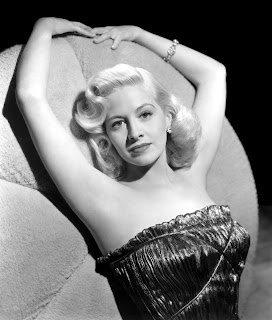 She was often called "the other Marilyn", and like Marilyn Monroe, Marilyn Maxwell had an equally short and tragic life. Maxwell was born Marvel Marilyn Maxwell on August 3, 1921. Her parents tried to get her in show business at a young age, and she was trained as a dancer as early as age 3. Miss Maxwell's show business career began when she was a child under the tutelage of her piano-teacher mother, Mrs. Harry E. Maxwell of Clarinda. After leaving Clarinda when Marilyn was five, Mrs. Maxwell toured the country as an accompanist. Harry Maxwell died in 1950 at Tabor, where he farmed. Mrs. Maxwell died in 1951. Miss Maxwell missed the funerals of both her parents because she was on USO tours for American servicemen around the world.

Maxwell started her professional entertaining career as a radio singer while still a teenager before signing with MGM in 1942 as a contract player. The head of MGM, Louis B. Mayer, insisted she change the "Marvel" part of her real name. She dropped her first name and kept the middle. During the 1940s, she also appeared with Bing Crosby on his "Kraft Music Hall" radio program. Maxwell never made it really big in Hollywood but some of her film roles included Lost in a Harem (1944), Champion (1949), The Lemon Drop Kid (1951), and Rock-A-Bye Baby (1958). The Christmas carol classic "Silver Bells" made its debut in The Lemon Drop Kid, sung by Maxwell and Hope.

On television, Maxwell appeared twice as a singer in the second season (1955–1956) of NBC's The Jimmy Durante Show. On May 16, 1957, she guest starred on NBC's The Ford Show, Starring Tennessee Ernie Ford. In the 1961-1962 television season, Maxwell played Grace Sherwood, owner of the diner on ABC's 26-episode Bus Stop, a drama about travelers passing through the fictitious town of Sunrise, Colorado.

She married MGM actor John Conte in 1944 in The Little Church Around the Corner in New York City; they divorced two years later. Her second marriage to restaurateur Anders McIntyre lasted one year. Her third marriage to writer/producer Jerry Davis produced a son, Matthew who was born on April 26, 1956. They divorced after six years of marriage. 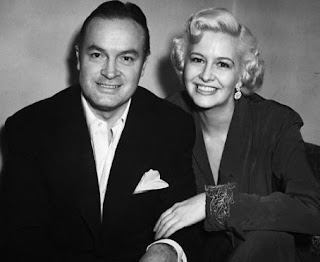 According to Arthur Marx's Bob Hope biography "The Secret Life of Bob Hope," Marilyn Maxwell had a long term affair with comedian Bob Hope. He gave her constand work in the 1940s and 1950s on radio as well as touring with him on his many USO shows. The affair with Maxwell was so open that the Hollywood community routinely referred to her as "Mrs. Bob Hope." Also during this time it was reported that Marilyn had an affair with singer Frank Sinatra. The affair was briefly touched upon in the television movie "Sinatra" in 1992.

Despite finding love in all the wrong places, Maxwell was widely loved among her friends. A close friend of Rock Hudson, she helped closet his homosexuality by making frequent public appearances with him and teasing reporters about how their relationship was "only a friendship."

By the 1960s, alcohol had taken its toll on Maxwell's career and looks. At her lowest point in 1967 she was discovered to be performing in a burlesque show as a stripper in Queens, New York. On March 20, 1972, Maxwell's 15-year-old son arrived home from school and found her dead at the age of fifty of an apparent heart attack, after she had been treated for hypertension and pulmonary disease. Bob Hope, Bing Crosby, Frank Sinatra, and Jack Benny were honorary pallbearers at her funeral. Hope gave a memorable eulogy, and Rock Hudson looked after her son during the funeral and years afterward. 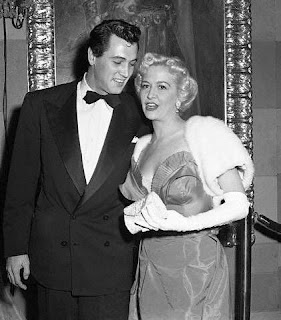 Marliyn Maxwell did not receive the fame that Marilyn Monroe did, but listening to her old radio broadcasts, she had a happiness in her voice I hope never left her. Thankfully the radio shows and sporadic movies she made are testaments to what a talent she was. Her television and movies are evidence of her beauty, but her radio shows really capture her personality in her voice. Despite her poor choices in life, Marilyn Maxwell really deserves to be remembered... 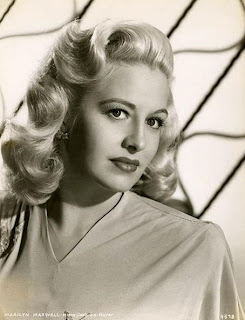 Posted by David Lobosco at 4:56 AM