THE CURSE OF THE CONQUEROR 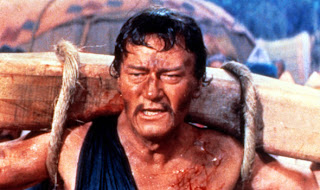 A few movies through the years have sad occurances or deaths among the cast. Often they are deemed to be cursed. A lot of the myths about cursed movies are simply urban legends that pop up. Sometimes the supposed curses give the movie more of a cult following and actually add to their appeal However, one tragic movie that was cursed from the beginning due to simply where it was filmed was The Conqueror.

The Conqueror is a 1956 CinemaScope epic film produced by Howard Hughes and starring John Wayne as the Mongol conqueror Genghis Khan. Other performers included Susan Hayward, Agnes Moorehead, and Pedro Armendáriz. Directed by actor/director Dick Powell, the film was principally shot near St. George, Utah. The Conqueror was a critical and commercial failure (often ranked as one of the worst films of the 1950s and one of the worst ever)despite the stature of the cast. Wayne, who was at the height of his career, had lobbied for the role after seeing the script and was widely believed to have been grossly miscast.

Reportedly, Howard Hughes felt guilty about his decisions regarding the film's production, particularly over the decision to film at a hazardous site. He bought every print of the film for $12 million and kept it from view until 1974 when it was first broadcast on TV. The Conqueror, along with Ice Station Zebra, is said to be one of the films Hughes watched endlessly during his last years. 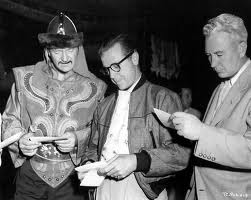 The exterior scenes were shot on location near St. George, Utah, 137 miles (220 km) downwind of the United States government's Nevada Test Site. In 1953, extensive above-ground nuclear weapons testing occurred at the test site, as part of Operation Upshot-Knothole. The cast and crew spent many difficult weeks on location, and in addition Hughes later shipped 60 tons of dirt back to Hollywood in order to match the Utah terrain and lend verisimilitude to studio re-shoots. The filmmakers knew about the nuclear tests but the federal government reassured residents that the tests caused no hazard to public health

Director Dick Powell died of cancer in January 1963, seven years after the film's release. Pedro Armendáriz was diagnosed with kidney cancer in 1960, and committed suicide in 1963 after he learned his condition had become terminal. Agnes Moorehead died of cancer in 1974, and Susan Hayward and John Wayne followed in 1975 and 1979. Cast member actor John Hoyt died of lung cancer in 1991. Skeptics point to other factors such as the wide use of tobacco — Wayne and Moorehead in particular were heavy smokers. The cast and crew totaled 220 people. By 1981, 91 of them had developed some form of cancer and 46 had died of the disease. Several of Wayne and Hayward's relatives also had cancer scares as well after visiting the set. Michael Wayne developed skin cancer, his brother Patrick had a benign tumor removed from his breast and Hayward's son Tim Barker had a benign tumor removed from his mouth. 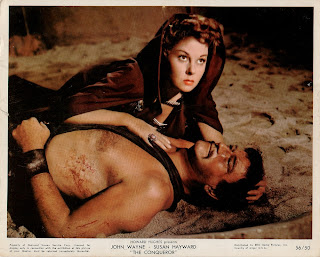 Dr. Robert Pendleton, professor of biology at the University of Utah, stated, "With these numbers, this case could qualify as an epidemic. The connection between fallout radiation and cancer in individual cases has been practically impossible to prove conclusively. But in a group this size you'd expect only 30-some cancers to develop. With 91, I think the tie-in to their exposure on the set of The Conqueror would hold up in a court of law." Indeed, several cast and crew members, as well as relatives of those who died, considered suing the government for negligence, claiming it knew more about the hazards in the area than it let on.

We may never know if the death of the cast members were due to the nuclear fallout, but what is known is that if nothing else The Conqueror is cursed as a horrible movie, that probably would have been better off not to have been made at all... 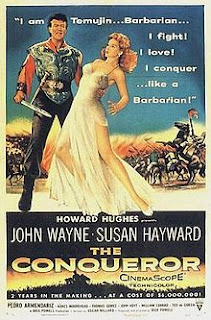