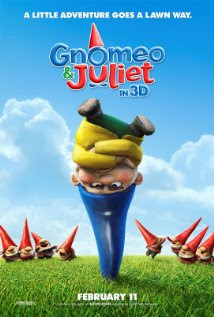 It is really hard to find truly suitable movies for children these days. If I had my way, I would show my son every classic movie that I love, but his attention span just is not there yet. Next to a classic movie, I guess a family cartoon is the next best thing. One great cartoon that I recommend - and I have seen six times now is the movie Gnomeo And Juliet.

Gnomeo & Juliet is a 2011 British computer-animated family comedy film based on William Shakespeare's play Romeo and Juliet. The film is directed by Kelly Asbury, and the two main characters are voiced by James McAvoy and Emily Blunt. Gnomeo & Juliet is directed by Kelly Asbury. The original screenplay, inspired by William Shakespeare's Romeo and Juliet, was written by John R. Smith and Rob Sprackling. Asbury, Mark Burton, Kevin Cecil, Emily Cook, Kathy Greenberg, Andy Riley, and Steve Hamilton Shaw worked on the final screenplay. Prior to the casting of James McAvoy and Emily Blunt, the roles of Gnomeo and Juliet were to be voiced by Ewan McGregor and Kate Winslet, respectively. In addition, this film reunites veteran British actors Maggie Smith and Michael Caine, from the 1978 Neil Simon comedy California Suite, in the roles of Lady Blueberry and Lord Redbrick, respectively.

The film was the original idea of Sprackling and Smith, who sold the spec script to Disney through Rocket Pictures. Initially, the film was going to be produced by Walt Disney Animation Studios, but was shut down by its new chief, John Lasseter, after the Pixar acquisition. Miramax Films picked up the project and guided its production until the division closed down. Australian director Adam Elliot was approached and asked to direct the film, but he rejected the offer due the film's incompatibility with his style, as well as his lack of experience with CGI. The film later was picked up and produced by Starz Animation in Toronto. It was released under the Touchstone Pictures banner on February 11, 2011, becoming Touchstone's first animated film since 1993's The Nightmare Before Christmas and also Touchstone's first film to receive a G rating from the MPAA. 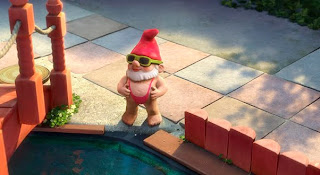 Mrs. Montague and Mr. Capulet (Julie Walters and Richard Wilson) are two elderly neighbors who despise each other. When they leave the garden, objects come alive in both their gardens. The Montague garden is filled with blue garden gnomes, and the Capulet garden houses red garden gnomes. Later, both blue and red gnomes attend a lawnmower race. Representing the blues is Gnomeo (James McAvoy) and representing the reds is Tybalt (Jason Statham). During the race, it looks like Gnomeo is winning; however, Tybalt cheats and wins the race, destroying Gnomeo's lawnmower. Gnomeo and his best friend, Benny (Matt Lucas), insult Tybalt for cheating, but Tybalt ignores them. Benny watches Mrs. Montague ordering a new cheap lawnmower called The Kitten Clipper, disappointed.

Later that night, Gnomeo and Benny infiltrate the red garden in disguise, with blue spray cans. Benny sprays Tybalt's well and accidentally triggers a security light in the process, alerting the red gnomes to attack. During the escape Gnomeo ends up in a nearby neglected garden. He bumps into a disguised Juliet (Emily Blunt), the daughter of the red gnomes leader Lord Redbrick (Michael Caine). Juliet is attempting to retrieve a unique orchid, and the two romantically fight over it. They each discover the other's colour before fleeing the garden. When they both go back to their gardens, Juliet tells her frog friend Nanette (Ashley Jensen) about her newfound love. Nanette states that the relationship is romantically tragic. 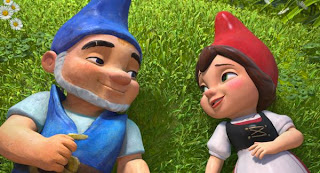 Gnomeo and Juliet then have secret meetings in a secret garden, where they meet a pink plastic flamingo named Featherstone (Jim Cummings). He encourages their love, and the two begin to meet regularly. Though when the two of them are getting ready for a date, Lord Redbrick introduces Juliet to Paris (Stephen Merchant), a red gnome that Nanette has fallen for, though Juliet manages to get away. Later, when the two return back to their gardens, Gnomeo finds his mother Lady Bluebury (Maggie Smith), who is distraught after the reds infiltrated the garden and destroyed the plant Gnomeo's deceased father planted. The blues want Gnomeo to take revenge on the reds, and he realizes that he cannot refuse unless he tells his secret. He tunnels underneath to reach the red garden, but just as he is about to spray the prized flowers of the reds, Juliet sees him. He backs out suddenly, telling Benny that the nozzle on the spraying bottle was jammed. 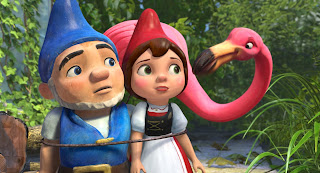 When he and Juliet meet up again, they briefly argue until Featherstone stops them, telling them that other people's hate destroyed his love. He and his girlfriend were separated when the two people living in the house, where their garden was, got divorced. After he has explained this, Gnomeo and Juliet apologize, but when they are about to kiss, Benny sees them, distracts them, then runs into the alleyway, where Tybalt is waiting with his lawnmower. Tybalt drives at Benny, chops his hat clean off with a trowel, and attempts to run him down with his lawnmower. Tybalt is interrupted by Gnomeo, and he is destroyed when crashing into a wall. The reds attempt to attack Gnomeo, but Juliet, to the surprise of her father and clan, defends Gnomeo, saying that she loves him. A woman suddenly jogs along, so all gnomes become still and inconspicuous. Gnomeo ends up on a road, and everyone believes he was run over by a truck. Lord Redbrick has Juliet glued to her fountain because he does not want to lose her like her mother. Gnomeo's pet, a mushroom named Shroom, is left alone and goes on the road, where he realizes that what appeared to be Gnomeo is actually a broken blue teapot, and that Gnomeo is still alive. Gnomeo eventually ends up in a park, and climbs onto a Statue of William Shakespeare (Patrick Stewart) and tells him his story. Shakespeare tells Gnomeo that his story is very similar to Romeo and Juliet and that it is likely Gnomeo's will have a sad ending as well. However, Gnomeo refuses to accept that sort of ending. Shroom and Featherstone come to find him. 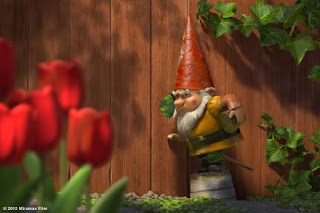 Benny, meanwhile, cancels the order of the Kitten Clipper and buys the Terrafirminator lawnmower using the computer, to get revenge on the Red Gnomes, despite Shroom trying to convince him that Gnomeo is still alive. The Terrafirminator goes out of control and destroys most of the two gardens while the gnomes wage a full scale war. Gnomeo makes it back to Juliet to try to un-glue her, but he is unable to. She tells him to go, but he refuses, and the two share a kiss just as the lawnmower crashes into the fountain, self-destructing in the process. Everyone believes that both Gnomeo and Juliet are dead. Lord Redbrick and Lady Bluebury, both realizing that their feud was responsible for this, decide to end the feud. As they do, they accidentally trigger a switch, which causes a massive tropical castle display to rise up from the remains of Juliet's pedestal. Much to the astonishment of all the gnomes, both Gnomeo and Juliet are revealed to have survived as they rise from the ruins. The residents of the gardens celebrate and Gnomeo and Juliet kiss just as Mrs. Montague and Mr. Capulet return to find their yards destroyed.

The film ends happily with the red and blue gnomes finally coming together to celebrate their newfound peace. Tybalt is also revealed to still be alive having been glued back together (and presumably has a more pleasant disposition). Featherstone is also reunited with his girlfriend after Benny finds and orders her online. Meanwhile, Gnomeo and Juliet get married on a purple lawnmower, which symbolizes the new union of both gnome clans. 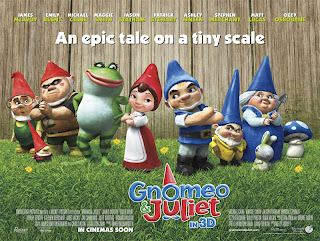 I want to admit something here as well. I have even watched the movie when my son was not around, but it's a cute movie. Admitting I have a problem I guess is half of the battle!