MOVIE REVIEW: THE FACE BEHIND THE MASK 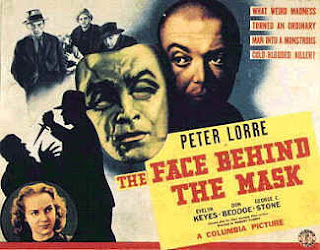 When I first started really collecting movies, back in the day of Beta and VHS tapes, I managed to tape a short movie that was long forgotten. I think it was actually on Cinemax at the time.

The movie is not even 90 minutes long, but this little movie has been one of my favorite movies all these years. The Face Behind the Mask is a minor B-movie crime-drama released by Columbia Pictures in 1941. It starred Peter Lorre and Evelyn Keyes and was directed by Robert Florey and Wallace MacDonald. To date, it has never been released on DVD or video.

Based on the radio play by Thomas Edward O'Connell, The Face Behind the Mask was not a film that Lorre held in high esteem. His co-star Don Beddoe, who plays the police officer who befriends Janos in the film, once said, "I don't think Peter was very much impressed with The Face Behind the Mask. His other successes, such as M, made him pretty blasé about this particular venture."

The film is the story of a hopeful new immigrant, Janos Szaby (Peter Lorre), who, on his first day in New York City, is trapped in a hotel fire that leaves his face hideously scarred. Refused employment due to his appearance although he possesses tremendous skill as a watchmaker, the only way he can survive is by turning to theft, using his skilled hands to disable alarms. Eventually he becomes the leader of a gang of thieves, and raises enough money to commission and wear a realistic latex mask of his own face. 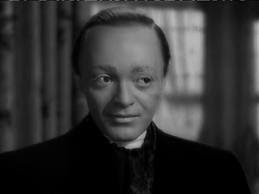 Janos then falls in love with Helen (Evelyn Keyes) a blind woman who sees only the good in him, and attempts to leave his life of crime behind him. Unfortunately, his gang come to believe that he has betrayed them to the police, and attempt to kill him by car bomb, an attempt on his life that he survives but that Helen does not. In retaliation, Janos disguises himself as the pilot of the private plane the gang is flying out of the city with, which he lands in the Arizona Desert and lets out the fuel, suicidally stranding both the gang and himself without food or water, dooming them all to a slow death. At the film's end, Janos's body and that of his enemies are discovered by the police. The climax, set in a desolate stretch of desert with Janos tied to an abandoned plane, is a bleak counterpoint to the immigrant's hopeful beginnings. More than anything, The Face Behind the Mask is a vision of the American dream gone horribly wrong but under the artful direction of Robert Florey along with Franz F. Planer's atmospheric cinematography and Lorre's sensitive performance, it becomes a rich, multi-layered character study, a gem among the Columbia Pictures programmers of the forties. 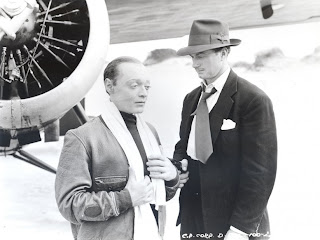 If you are a fan of Peter Lorre or the understated performances of Evelyn Keyes, then I recommend The Face Behind The Mask. This movie deserves to be remembered and preserved on DVD. I was lucky to catch an airing of the forgotten film on TCM, and my copy is one of my prized possessions in my movie collection. This fine character study is not one that should be missed...