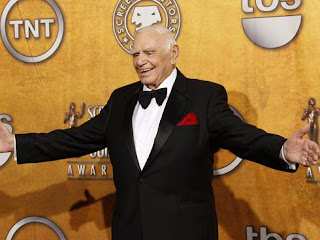 Film and TV legend Ernest Borgnine is heading back to sea in December, this time on a cruise ship.

Theme cruise organizer Sixthman says the star of the 1960s television show McHale's Navy will be among the headliners on the first TCM Classic Cruise, scheduled to kick off on Dec. 8.

The four-night sailing on Celebrity Cruises' 1,950-passenger Celebrity Millennium is aimed at classic movie fans and also will include appearances by Tippi Hedren, Norman Jewison and Eva Marie Saint.

Also onboard the sailing will be Turner Classic Movies primetime host Robert Osborne and weekend-daytime host Ben Mankiewicz. The voyage will include performances by the Alloy Orchestra, a three-man musical ensemble that has written and performed live accompaniment to classic silent films for more than two decades.

The Celebrity Millennium will be sailing from Miami to Key West, Fla. and Cozumel, Mexico, and the trip will include movie-themed events such as screenings, panel discussions and trivia contests...

SOURCE
Posted by David Lobosco at 5:32 AM