TO KILL A MOCKINGBIRD TO AIR ON USA NETWORK 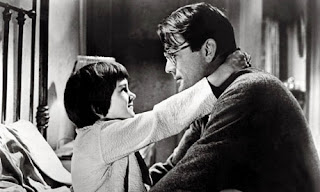 The president will make his comments for USA Network’s broadcast of the iconic film about racial tolerance on April 7. It’s the first time Mockingbird will be nationally shown after being digitally remastered and restored, and marks the film’s 50th aniversary. USA’s corporate cousin, Universal Pictures, recently released the restored version of Mockingbird — as well as three hours of bonus materials including two full-length documentaries — on Blu-ray as part of a series that includes 12 other classic films. “I’m deeply honored that President Obama will be celebrating the 50th Anniversary of To Kill A Mockingbird by introducing it to a national audience,” the book’s author Harper Lee says. “I believe it remains the best translation of a book to film ever made, and I’m proud to know that Gregory Peck’s portrayal of Atticus Finch lives on – in a world that needs him now more than ever.”

SOURCE
Posted by David Lobosco at 4:42 AM

Labels: news, To Kill A Mockingbird