HISTORY OF A SONG: EASTER PARADE 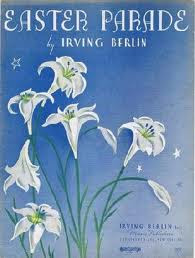 There are hundreds and even thousands of songs written and dedicated to Christmas. However, there is not many written in honor of Easter. Not only is Easter a religious holiday in Christianity, but for me it always signaled the true start of spring when everything was in bloom and the world became alive again. Probably the most famous Easter song though was written way back in 1917 by one of the best songwriters of all time, Irving Berlin.

Berlin originally wrote the melody in 1917, under the title "Smile and Show Your Dimple." The song flopped but the composer filed away the melody for later use. The song was introduced by Marilyn Miller and Clifton Webb in the Broadway musical revue As Thousands Cheer (1933), in which musical numbers were strung together on the thematic thread of newspaper headlines.

The song was first sung in the movies in Bing Crosby's "Holiday Inn" (1942). Bing sings the song riding a carriage in the easter parade with co-star Marjorie Reynolds. Bing also recorded the song commericially in 1942, but unfortunately Bing had a cold when the song was recorded. Sadly, the take they used was the one where Bing sounded quite nasally. He sang the song on his radio show as well but never made another record of the song. 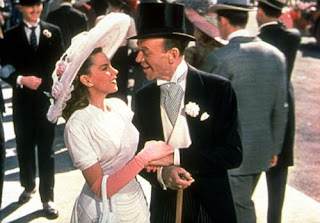 The next time the song appeared in a film was the movie musical "Easter Parade" (1948). "Easter Parade" was an MGM musical starring Judy Garland and Fred Astaire and featuring music by Irving Berlin, including some of Astaire and Garland's best-known songs, such as "Steppin' Out With My Baby" and "We're a Couple of Swells." It was the most financially successful picture for both Garland and Astaire as well as the highest-grossing musical of the year.

The song "Easter Parade" was also featured in the Rankin/Bass special The First Easter Rabbit in 1976 and has since become a standard. Unfortunately, almost hundred years after the song was first written it is fading into tin pan alley obscurity. (Are there even still actual Easter Parades?) However, with the great recordings by Bing Crosby, Judy Garland, Fred Astaire, and others - songs like "Easter Parade" are never truly forgotten...
Posted by David Lobosco at 4:17 AM