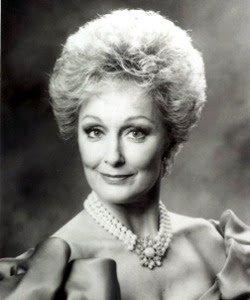 "I am saddened to report that Paula Kelly Cole (Paula Kelly Jr.) passed away peacefully at 8:25pm (PST), according to her sister, Julie Dickinson Lancaster."

For those of you who did not know Paula, she was the daughter of two of the greatest vocal group singers of all time, Paula Kelly Sr. and Hal Dickinson, founders of The Modernaires. The Modernaires were long associated with the Glenn Miller Orchestra, racking up dozens of hit recordings before embarking on a solo career which took them into radio, television and motion pictures.

Paula Jr. took over her mother's place as lead singer in The Modernaires in the late-'70s, a position she held until just a few months ago when she was sidelined due to surgery on her vocal cords. Sister Julie stepped in to sing lead, and Ginger Berglund was brought on board to fill out the quartet. Paula Jr. became ill about a week ago with a brain aneurysm, followed by other complications, and was removed from life support earlier this afternoon, with family at her bedside...

"I can say will all certainty that Paula was one of the most gracious, cheerful and funny people I've ever had the pleasure of knowing. She was full of enthusiasm for big band music (my kind o' people!), and I enjoyed many conversations with her over the past few months. Her only concern she expressed to me as of late was worrying about not being able to sing again after her surgery. That is no longer a concern of hers, as she is surely singing in an all-star vocal group above!" George Spink

PAULA KELLY Jr was born in Grove City, PA, the middle daughter of Hal Dickinson and Paula Kelly. Early on she sang in church choirs. Educated in San Fernando Valley, CA schools, she majored in music. Singing with “The Modernaires” from 1966 through 1971 she traveled most of the world learning the lead part from her Mother. Hal, her father passed in 1970 and in 1971 she retired to marry. 1972 brought her a beautiful red haired daughter, Jennifer Holly Cole.

Previously Paula had performed with her two sisters, Julie and Martha in a trio called “The Kelly Sisters”. They made several appearances on the Bob Crosby and Dean Martin television shows. When her Mom, Paula Kelly retired in 1978, the natural replacement was her daughter, Paula Kelly Jr. She was so privileged to have worked with most of the great acts of the 40’s and 50’s. These were her parent’s friends and colleagues.

They were great Entertainers such as, Helen Forrest, Tex Beneke, Helen O’connell, Bob & Ray Eberle, Peter Marshall, Tony Martin, Count Basie, Les Brown, The Mills Brothers, Rosemary Clooney and yes, even Louie Armstrong. “The Modernaires” toured six times in Australia. Three of the tours were with surviving members of the Glenn Miller Orchestra. Billy May, an original, actually took trumpet lessons to do the tour. Among others on the tour were Paul Tanner, Wilbur Schwartz, John Best, Jimmy Priddy, Al Klink and Zeke Zarchy... 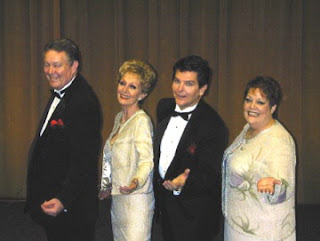