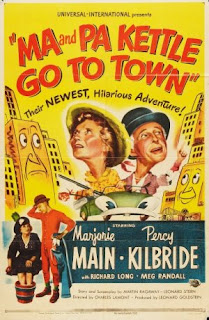 One of the great memories I had as a child were of Sunday mornings when the local television station would rerun old comedy movie series. Each Sunday they would rotate a series so I remember seeing Abbott and Costello, Blondie, and of course Ma and Pa Kettle. Like so many many things in life, when I get a chance to catch a Ma and Pa Kettle movie, it takes me back to a simpler and less stressful time. I recently got the chance to watch Ma and Pa Kettle Go To Town (1950). Of course, I could not stop watching the film.

The second of Universal's "Ma and Pa Kettle" series, Ma and Pa Kettle Go to Town stars, as ever, Marjorie Main and Percy Kilbride. This time, the Kettles win a letter-writing contest, which offers as first prize an all-expense-paid trip to New York City. Once in Manhattan, the huge Kettle brood raises all sorts of Holy Ned, culminating in an episode involving stolen bank money. Somehow this all ends with a riotous, slapstick-laden square dance. The film's romantic subplot is handled by Richard Long as oldest son Tom Kettle and Meg Randall as his high-society wife Kim. Also carried over from the first Kettle entry are Ray Collins and Barbara Brown as the Kettle's wealthy in-laws. A winner at the box-office, Ma and Pa Kettle Go to Town helped pay for many of Universal's "prestige" releases of 1950. 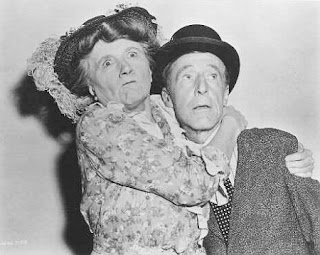 Marjorie Main and Percy Kilbride are the only actors I could ever picture in the Ma and Pa Kettle roles, and they make the film. If the movies were just them two talking back and forth, I would watch it. However, in this film there were some good character roles. I liked Charles McGraw (1914-1980) as the gangster that Pa has "good feelings" about so he watches their children. McGraw was a very dependable character actor, who sadly died relatively young when he fell in shower. The plot line of a stranger watching someone's children is kind of far feteched, but the story does take place in a backwards town in 1950. Times were different then. Also in a surprisingly straight role, Jim Backus (1913-1989) played one of the other gangsters.

Ma And Pa Kettle Go To Town is no great cinema masterpiece, but it made a lot of money for Universal in 1950. It is also a movie you can just sit back and relax. The movie is simpler so it helps you to hark back to maybe a simpler time in your life. I know whenever I watch a Ma and Pa Kettle movie my mind is not only watching the movie, but I see myself as a young boy laying on the floor and enjoying an uneventful Sunday morning. Those were the days... 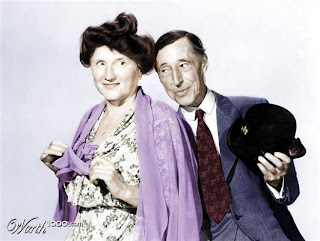 Posted by David Lobosco at 5:24 AM