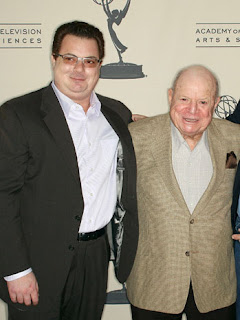 Larry Rickles, an Emmy Award-winning producer and the son of comedian Don Rickles, died Saturday in Los Angeles of respiratory failure due to pneumonia. He was 41.

The younger Rickles earned an Emmy in 2008 as a producer on HBO’s Mr. Warmth: The Don Rickles Project, which was named the outstanding variety, music or comedy special of the year. The documentary, which was directed by John Landis and included home movies, also earned his father an Emmy for outstanding individual performance in a variety or music program. Born in Los Angeles on May 12, 1970, Larry Rickles worked in production on a number of network sitcoms early in his career. In 1996, he was accepted into the writers workshop program at Warner Bros., and the following year he became a writer on the CBS hit sitcom Murphy Brown.

In addition to his father, Rickles is survived by his mother Barbara and his sister Mindy. The family has asked that donations be made to Children’s Hospital Los Angeles.