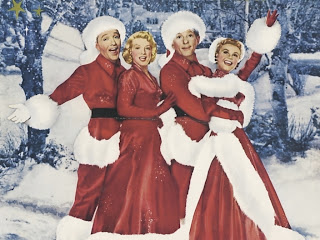 Now my favorite Bing Crosby holiday movie is "Holiday Inn" (1942), there is no doubt about that. However, it seems every year I watch 1954's "White Christmas" more. It is a good movie, but in my opinion not the greatest movie for Bing or its songwriter Irving Berlin. Whereas "Holiday Inn" starred Bing and Fred Astaire, "White Christmas" had Bing teamed with comedian Danny Kaye. Kaye was a third choice actually. The producers originally sought Astaire for the role to be reunited with Bing, but Fred turned down the role because of the death of his wife. The second choice was Donald O'Connor, but he broke his ankle before shooting took place. Despite the casting changes and the corny plot "White Christmas" is a fun movie to watch. Unfortunately, I watched the version this year on AMC - with a ton of commercial interruptions.

The story is about two World War II U.S. Army buddies, one a former Broadway entertainer, Bob Wallace (Crosby), the other a would-be entertainer, Phil Davis (Kaye). It begins on Christmas Eve, 1944, somewhere in Europe. In a forward area, Captain Wallace is giving a show to the troops of the 151st Division with the help of Private Davis ("White Christmas"). Major General Thomas F. Waverly (Dean Jagger) arrives for the end of the show and has a field inspection prior to being relieved of command of the 151st by Brigadier General Harold G. Coughlan (Gavin Gordon). The men give him a rousing send-off ("The Old Man"). During an enemy artillery barrage, Davis saves Wallace's life by pushing him out of the way of a toppling wall, wounding his own arm slightly in the process. Using his "wounded" arm and telling Bob he doesn't expect any "special obligation", Phil convinces Bob to join forces as an entertainment duo when the war is over. Phil using his wound to get Bob to do what he wants becomes a running gag throughout the movie. After the war, the pair make it big in nightclubs, radio, and then on Broadway. They become the hottest act around and eventually become producers. They subsequently have a big hit with their New York musical, Playing Around. In mid-December, after 2 years on Broadway, the show is in Florida. While at the Florida Theatre, they receive a letter from "Freckle-Faced Haynes, the dog-faced boy", a mess sergeant they knew in the war, asking them to audition his two sisters. When they go to the club to audition the act ("Sisters"), Betty (Rosemary Clooney) reveals that her sister, Judy (Vera-Ellen), sent the letter. Phil and Judy leave the table to dance ("The Best Things Happen While You're Dancing") so that Bob and Betty can get to know each other, though there is also an attraction between them. Bob and Phil help Betty and Judy escape their landlord and the local sheriff (the landlord claimed that the sisters had burned a $200 rug). The boys perform the girls' signature song "Sisters" from a record as the girls escape to the train. Phil gives Betty and Judy the train tickets that he and Bob were intending to use.

When Bob and Phil arrive on the train, they have no tickets. Using "his arm" again, Phil gets Bob to agree to travel with the girls to Vermont for the holidays ("Snow"). They discover that the Columbia Inn in Pine Tree, Vermont, is run by their former commanding officer, Major General Tom Waverly, and it's about to go bankrupt because of the lack of snow and consequent lack of patrons. The general has invested all his savings and pension into the lodge.

Deciding to help out and bring business to the inn, Wallace and Davis bring Playing Around with their entire Broadway cast up and add Betty and Judy where they can. Bob discovers the General's rejected attempt at rejoining the army, and decides to prove to the General that he isn't forgotten. 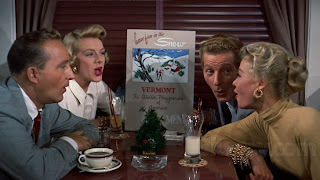 Bob calls Ed Harrison (Johnny Grant), an old army friend, now host of a successful variety show (intentionally similar to Ed Sullivan's). When Bob wants to make a pitch on the show to all the men under the command of the General in the war, Harrison suggests they go all out and put the show on television, playing up the "schmaltz" factor of the General's situation and generating lots of free advertising for Wallace and Davis. Overhearing only this, the housekeeper, Emma Allen (Mary Wickes), tells Betty. Bob tells Ed that isn't the idea and that he only wishes to make a pitch to get as many people from their division to Pine Tree for the show on Christmas Eve. The misunderstanding causes Betty to leave for a job at the Carousel Club in New York, after Phil and Judy fake their engagement in the hope of bringing Betty and Bob closer together.

On the Ed Harrison Show, Bob asks all the veterans of the 151st Division to come to Pine Tree, Vermont on Christmas Eve ("What Can You Do With A General"). All is set right when Betty sees Bob's pitch on the Ed Harrison show. She returns to Pine Tree just in time for the show on Christmas Eve. Believing all of his suits had been sent to the cleaners, General Waverly concludes that he'll have to appear in his old uniform. When the General enters the lodge where the show is to take place, he is greeted by his former division to a rousing chorus of "The Old Man", and moments later is notified that snow is falling. 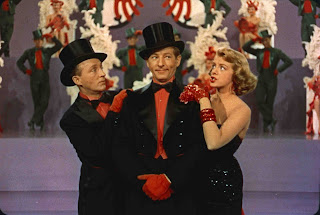 In a memorable finale, Bob and Betty declare their love, as do Phil and Judy. The background of the set is removed to show the snow falling in Pine Tree. Everyone raises a glass, toasting, "May your days be merry and bright; and may all your Christmases be white"...