For our last look at the sex symbols of a decade we fast foward to the 1950s. The decade of the 1950s was the era of the middle class, Dwight D. Eisenhower, and a prosperity this country has not felt in years. Television was stealing away the movie going audience, so Hollywood had to try all sort of things to fill their seats. From 3D to cinemascope, they tried everything. Another thing that the movie studios realized was sex sells. By the 1950s movies were starting to show more skin and the sex symbols were more overtly sexual than ever before. Here are some of the popular sex symbols of that decade: 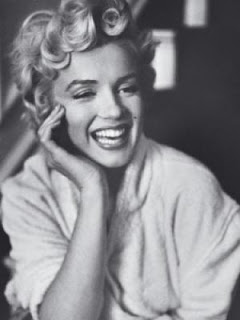 MARILYN MONROE (1926-1962)
No other actress has had more of an impact on the screen as much as Marilyn Monroe. She was only a movie star a relatively short time, but almost fifty years after her death, her legend lives on. She was more than just a pretty face in my opinion. Her singing was actually pretty good in movies like "There's No Business Like Show Business" (1954), and her comic timing was great in the classic "Some Like It Hot" (1959). Probably the appeal of Monroe is she died so young. Audiences never saw her age. Forever, she will be remembered as the Marilyn Monroe on the screen. The final years of Monroe's life were marked by illness, personal problems, and a reputation for being unreliable and difficult to work with. The circumstances of her death, from an overdose of barbiturates, have been the subject of conjecture. Though officially classified as a "probable suicide", the possibility of an accidental overdose, as well as the possibility of homicide, have not been ruled out. In 1999, Monroe was ranked as the sixth greatest female star of all time by the American Film Institute. 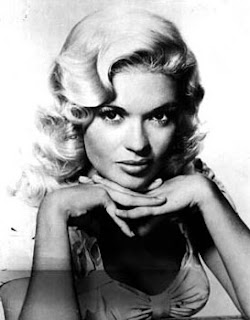 JAYNE MANSFIELD (1933-1967)
Like Marilyn Monroe, Jayne Mansfield died tragically young as well. Mansfield is well remembered for her starring roles in the 20th Century Fox comedy films The Girl Can't Help It (1956) and Will Success Spoil Rock Hunter? (1957). She also tackled a rare straight role in The Wayward Bus (1957), a film noted for being her best on-screen dramatic performance. As the demand for blonde bombshells declined in the 1960s, Mansfield remained a popular celebrity, continuing to attract large crowds outside the U.S. and in lucrative and successful nightclub tours. Her film career continued in lower budget melodramas and comedies, many filmed in the United Kingdom and Europe, including the independent film, Promises! Promises! (1963), in which she became the first American actress to appear nude, in a starring role, in a Hollywood motion-picture. 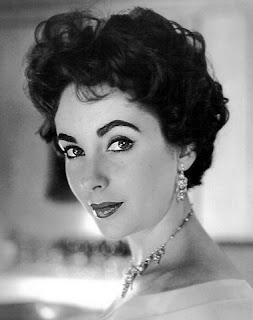 ELIZABETH TAYLOR (1932-2011)
Elizabeth Taylor was a part of Hollywood all her life. A British import in the 1940s, she grew into quite a sex symbol in the 1950s. Taylor had a major role in sparking the sexual revolution of the 1960s, as she pushed the envelope on sexuality: She was one of the first major stars to pose (mostly) nude in Playboy, and among the first to remove her clothes onscreen. "In A Place in the Sun", filmed when she was 17, her surprising maturity shocked Hollywood columnist Hedda Hopper, who wrote of her precocious sexuality. Film historian Andrew Sarris describes her love scenes in the film with Montgomery Clift as "unnerving—sybaritic—like gorging on chocolate sundaes." In real life, she was considered "a star without airs," notes Mann. Writer Gloria Steinem likewise described her as a "movie queen with no ego . . . expert at what she does, uncatty in her work relationships with other actresses." 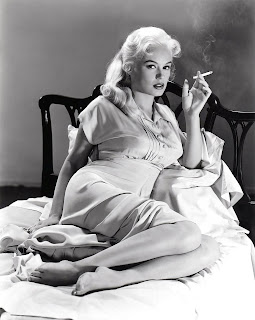 MAMIE VAN DOREN (BORN 1931)
Mamie Van Doren rose to popularity as Universal Pictures's version of 20th Century Fox's Marilyn Monroe. She starred in several cult classic Hollywood films including Untamed Youth (1957); High School Confidential (1958); Born Reckless (1958); Guns, Girls, and Gangsters (1959); Girls Town (1959); Vice Raid (1960); and, College Confidential (1960). These films earned Van Doren two nicknames: "Hollywood's Bad Girl" and one of "The Three M's". The other two were, Marilyn Monroe and Jayne Mansfield.Many of Van Doren's film roles showcased her ample curves, and her onscreen wardrobe usually consisted of tight sweaters, low-cut blouses, form-fitting dresses, and daring (for the era) swimsuits. She did not attain the same level of superstar status as Marilyn Monroe. While Monroe and Mansfield had break out roles, Mamie Van Doren became a caricature of herself. Now at 80 and still trying to show sex appeal, she is more like an over the hill Mae West than a beauty goddess from the 1950s.

As they say beauty is in the eye of the beholder, and the sixteen sex symbols we spotlighted over the last few weeks are no a complete list at all. In an upcoming article we will spotlight some of the stars we missed, so please feel free to send in suggestions...
Posted by David Lobosco at 4:21 AM