MOVIE REVIEW: SOLDIER IN THE RAIN 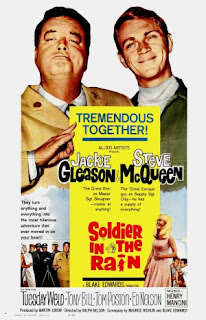 The film Soldier In The Rain is now available on Warner Brothers Vault series, but for many years the movie collected dust and was never seen. Many people who have seen the movie says it is corny, and fans of Steve McQueen do not like him playing a Gomer Pyle like character, but I think Soldier In The Rain is a charming movie, that I have always enjoyed. I got my DVD copy from a Steve McQueen fan, and it is one of my most cherished movie possessions.

Soldier in the Rain (1963), starring Jackie Gleason and Steve McQueen, is a comedy-drama film about the friendship between an aging Army Master Sergeant (Gleason) and a young country bumpkin buck sergeant (McQueen). Tuesday Weld also stars.

Produced and co-written by Blake Edwards, the screenplay is based on a 1960 novel by William Goldman, who was in the US Army from 1952-1954. The film was directed by Ralph Nelson, who had directed Gleason in Requiem for a Heavyweight the previous year and had a major success with his Lilies of the Field. The film was released five days after President John F. Kennedy's assassination, which didn't help its box office take.

Sergeant Eustis Clay (McQueen) is a peacetime soldier can't wait to finish his service and move on to bigger, better things. He is a personal favorite of Master Sergeant Maxwell Slaughter (Gleason), a military lifer who is considerably brighter than Eustis but enjoys his company and loyalty. 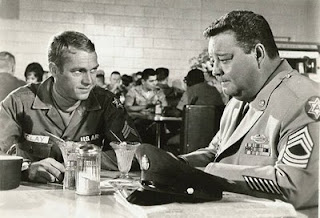 Eustis is involved in a number of schemes and scams, including one in which he will sell tickets to see an equally dim private named Meltzer run a three-minute mile. He inconveniences Slaughter more than once, including a traffic mishap that requires him being bailed out of jail.

Determined to tempt Slaughter with the joys of civilian life before his hitch is up, Eustis fixes him up on a date with the much-younger, not too bright Bobbi Jo Pepperdine. At first Slaughter is offended but gradually he sees another side of Bobbi Jo, including a mutual fondness for crossword puzzles. Eustis and Slaughter golf together and begin to enjoy the good life.

One night, Eustis is devastated to learn of the death of Donald, his dog. A pair of hated rivals wh use their status as Military Policemen to lure Eustis into a barroom brawl. He is beaten two-against-one and is nearly defeated when Slaughter angrily comes to his rescue. Together they win the fight, but the middle-aged, overweight Slaughter collapses from the effort.

Hospitalized, he delights Eustis by suggesting that they leave the Army together and go live on a tropical isle, surrounded by blue seas and beautiful girls. Slaughter dies, however, and Eustis, a changed man, re-enlists in the Army for another hitch. 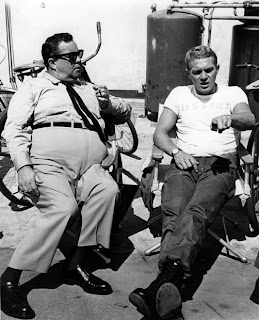 Film critic Craig Butler wrote about the film's theme, "An absorbing film that deserves to be much better known, Soldier in the Rain is a sometimes uneasy blend of comedy and drama that doesn't always quite come off, but has so much going for it that one is glad to overlook its flaws. A buddy picture set in the peacetime Army, Soldier is concerned with how a strong friendship can develop between two people of differing personalities and aims. Jackie Gleason and Steve McQueen are different types, and the fact that they have such a strong bond may at first seem unlikely, but as the film progresses it somehow seems natural and inevitable. Blake Edwards and Martin Richlin have done an excellent job of adapting William Goldman's novel, and together with director Ralph Nelson have opted to emphasize the character aspects of the material over the plot."