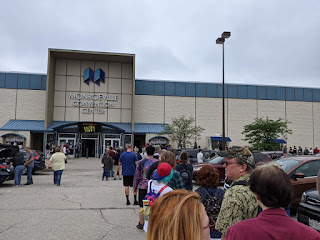 Due to covid, the Steel City Con in Pittsburgh - one of the biggest showcases of autographs, comics, and memorabilia was cancelled three times. Thankfully, the show went on finally on the weekend of June 11-13. This was my first venture to the Steel City Con, and it was a lot of fun. A lot of starts appeared, and I have to admit I was a bit star struck.

The biggest name at the convention was 90 year old William Shatner. It was hard to see him unless you bought an autograph, and he was behind a plexiglass like he was the Pope. The star though with the biggest line was Matthew Lillard. He starred in such movies as "Scream" and "Scooby Doo" among many others.
I am an old school autograph collector who used to write to the stars in order to get autographs so I do not like to spend a lot of money. I did treat myself to get the autograph of Alanna Masterson. She played the character of Tara on The Walking Dead from season 4 to season 9. She was one of the nicest celebrities I have ever had the pleasure of meeting, and she not only chatted with me for a few minutes but she was excited to take a selfie!
On the far end of the spectrum though was comedian Jon Lovitz. He starred on Saturday Night Live from 1985 to 1990, and he has also appeared in countless movies. He was the most miserable celebrity there. He never smiled, and although these comic conventions are the pillar of a career, Lovitz looked like he did not want to be there. I would not waste money on his autograph.
I spent most of the time looking at the rows and rows of vendors, and took pictures from the stars from afar. It was a great time, and so much funny. They are having another convention in August, but I think I'll wait until next year for my next one...

Posted by David Lobosco at 1:07 PM