THE GRANDDAUGHTER OF BUSTER KEATON 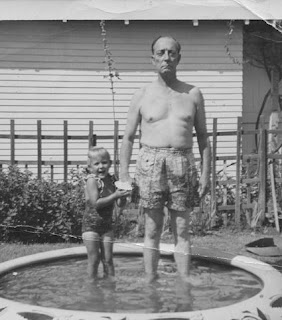 To the world, he was the famous silent film star Buster Keaton, but to Melissa Talmadge Cox of Cloverdale, he was simply Grandpa Buster. Melissa Talmadge Cox is the granddaughter of Buster Keaton and a long time resident of Cloverdale. Cox remembers him as being a lot of fun, and she always enjoyed visits to his big house on more than an acre in the San Fernando Valley. Grandpa Buster was a
model train buff with an elaborate set up in his garage, says Cox. He designed the tracks so they went outside through an opening in the wall, up and over the swimming pool, and around to a patio table and chairs on the other side.
When Cox and her brothers would visit, they’d sit at that table waiting for their snacks to arrive on little flat cars. Her dad, James Talmadge, was Grandpa Buster’s oldest son from his marriage to Natalie Talmadge. He was a publicist/photographer at 20th Century Fox, so Cox grew up with and around many Hollywood celebrities. When she was in second grade, she appeared in the “Kids Say the Darndest Things” segment of Art Linkletter’s television show. At 10, she bobbed for apples with Jayne Mansfield’s daughter. ”I even have a picture of myself sitting on Hugh O’Brien’s lap when I was in 4th grade,” she says with a laugh. It wasn’t until she was in college that she actually saw one of her grandfather’s movies.

“They were having a Silent Film Festival at Berkeley,” she recalls, “and the main show featured grandpa. I was stunned. I’d never seen him as a young man. “Watching him that day, I totally fell in love with silent films.” Since then, silent film festivals and fan clubs have become quite trendy. One of the most popular clubs is The Damfinos, better known as the International Buster Keaton Society (www.busterkeaton.com). Cox serves on its Board of Directors, and in 2010, she and her mom, Barbara, were special guests at The Damfino’s Annual Convention in Muskegon, Michigan.

Cox has a number of special keepsakes from her grandpa, including one of his signature pork-pie hats and a tie he hand-stitched. She takes many of these treasured items to the conventions and festivals she attends. After her step-grandmother Eleanor died in 1998, Cox became the family’s Goodwill Ambassador on behalf of her Grandpa Buster. Today, she regularly travels around the country, attending film festivals and conventions in his honor. Last year, she went to Germany for a Buster Keaton Film Festival.

Cox moved with her family to Cloverdale in the mid 70’s, and with a degree in horticulture, quickly landed a job she dearly loved at a nursery. People started asking her to help design their yards, so she enrolled at SRJC and soon became certified by the California Association of Nurserymen. For the past 25 years, she has been successfully self-employed as a landscape designer. When the last of her three children went to college, Cox took up painting. She had no art background, but for some reason the idea appealed to her. After taking a weekend watercolor class about 11 years ago, she discovered a talent she didn’t know she had. Since then, Cox has taught watercolor classes and won numerous awards, including three Best of Show honors. She is a member of the Watercolor Artists of Sonoma County (WASCO) and the First Street Gallery of Cloverdale, where several of her original watercolors are available for purchase, as well as prints, cards and bookmarks. Her paintings also hang in many private homes across the United States.

A few years ago, Cox drove to the Motion Picture Academy in Beverly Hills to deliver 20 boxes of photographs that had belonged to her Aunt Norma Talmadge and had been in her attic for more than 30 years. With the help of her dad (who died in 2007), Cox was able to identify many of the people in the photos, and the Academy now calls it the best original silent film photo collection ever... 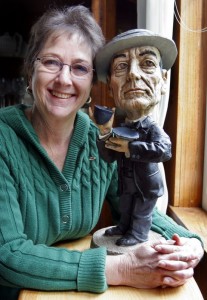 Posted by David Lobosco at 3:44 PM