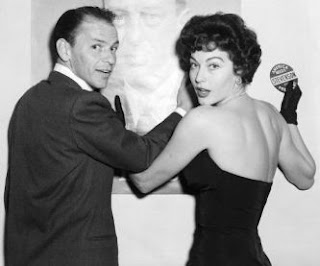 Not all Hollywood love stories come out with a happy ending - the majority of them do not. However, one of the most volatile and yet loving relationships actaully ended up in divorce and heart break. That relationship was the one between crooner Frank Sinatra and the beautiful actress Ava Gardner.

One night in 1948 Sinatra stood on the terrace of his ­Hollywood bachelor penthouse with his best friend, the songwriter Sammy Cahn, looking down over Sunset Strip. Frank's marriage to his childhood sweetheart Nancy was breaking up - it had been since he first rose to fame in the Tommy Dorsey Orchestra during World War II. His movie career was fading, and his records were not selling that much anymore.

‘Do you know that Ava Gardner lives down there?’ said Cahn, pointing to a little house nestled into the trees.

Cupping his hands to his mouth, he yelled ‘Ava … Ava Gardner!’ his big voice carrying far into the quiet evening. ‘We know you’re down there. Hello, Ava.’

The two men roared with laughter. And then a miracle. Down below, a curtain was drawn, a window opened and Ava stuck her head out. She knew exactly who it was. Sinatra’s voice was unmistakable. She grinned and waved. Was it an accident that they ran into each other a few days later, in front of her place? And then again in the street? Frank wasn’t usually keen on walking but suddenly he was getting out a lot. The third time, they both began laughing as he said hello.

He had met her, he remembered, when she was an 18-year-old starlet newly arrived in Hollywood and Mickey Rooney, no less, was madly in love with her. Though she was smokingly sexy, she was just a kid, Sinatra thought at the time, too young for him. He met her again and danced with her in a nightclub when he was with Lana, and she — at 23, divorced from both Rooney and her second husband, the band leader Artie Shaw — was with the ­billionaire tycoon Howard Hughes. 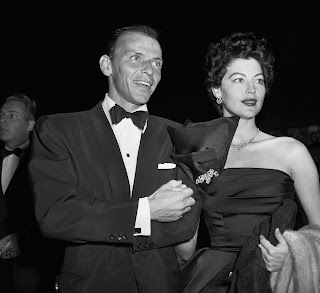 Then ­Sinatra’s friend Peter Lawford brought her to one of his parties. Dark haired with a white fur stole on her wide ­shoulders, he noticed how she prowled with the easy grace of a tigress. So began one of Hollywood’s ­legendary pairings of alpha male and female.

That night they went out drinking. Despite her stupendous looks, she had no confidence and alcohol, consumed in quantity, made her forget her deep self-doubt and feel glamorous, ­intelligent, desirable — a person worthy of the ­attentions of Frank Sinatra. She had always had a thing for ­musicians but he was in a different league. His voice had a quality, she said, ‘I’d only heard in two other people — Judy Garland and Maria Callas. It made me want to cry for happiness, like a beautiful sunset or a boys’ choir singing Christmas carols’. 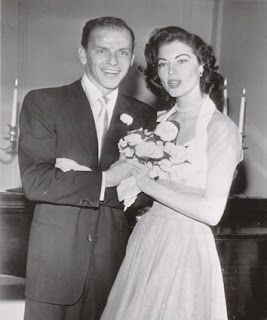 Ava Gardner told the Press that she was the happiest girl in the world in 1951 when they got married but Ava's marriage to Frank was doomed from the start. Both had titanic appetites, for food, drink, cigarettes, diversion, companionship and sex. Both loved jazz. Both were politically ­liberal. Both ­distrusted sleep, fearing it as death’s mirror. Both hated being alone. Like him, she was infinitely restless and easily bored. In both, this tendency could lead to casual cruelty to others —and to each other. They quarrelled ­constantly. Friends whose house the lovers met in recalled how Ava would scream at Frank and he would slam the door and storm downstairs. Ava had trouble with intimacy.

When a man fell in love with her, she ­reciprocated for a little while, then she began to torment him. For Frank, the similarities with his bullying mother — who used to beat him but whose approval he constantly craved — were scary and exciting. In their constant battles, jealousy was their emotional ammunition. Frank could trigger it in her with the blink of an eye, so conditioned was he to ­scanning any crowded party for ­gorgeous girls. She was convinced he was ­cheating on her, even when he wasn’t.

t if it was hard work being married to Ava Gardner, it was just as tough being married to Frank Sinatra. It didn’t help that Frank’s career was on a downward spiral at the time — records not selling, films flopping — while hers was very much on the up. As a foul-mouthed facsimile of his mother, she was the dominant one in the ­relationship. As a sexual volcano, she ruled him in bed. And to top it all off, she was paying the bills while he struggled. The combination was corrosive. 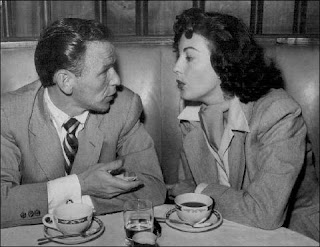 They were forever breaking up, then getting back together. They would throw each other’s clothes, books and records out of the windows. The police had to be called more than once. The gossip columns had a field day, ­following their every move, tracking the time they spent together and apart. Increasingly she signed up for work that took her away from him. In Europe — while Frank was back in the U.S. ­making From Here To Eternity, the film that would put his career back on track — she was pursuing Spain’s best-known bullfighter, Luis Miguel Dominguín, four years her junior.

And leave him is what Ava did, blaming his ­infidelities. Later, she would say: ‘I was ­happier married to Frank than ever before. If I’d been ­willing to share him with other women we could have been happy.’ But, in reality, the break-up was her ­decision. They separated in October 1953 and divorced in 1957.


It was like the lyrics of a song he recorded soon after: ‘I could have told you she’d hurt you/She’d love you a while, then desert you.’ He sang it with all the pain and ­sadness of one who knew... 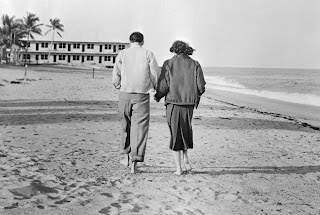 Posted by David Lobosco at 7:48 AM