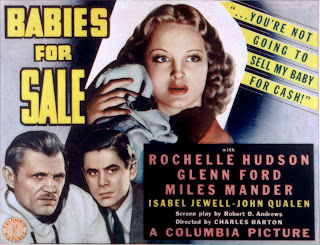 Here is another excellent review by the movie guru Bruce Kogan. This time he reviews a Glenn Ford movie. I have never really liked Glenn Ford in any movie, but it was interesting to read about this little known film...

Ironically Babies For Sale had some potential of being a fairly good feature. Only the skill and likability of the cast keep this film at an average level. Nobody's fault really, the Code made it impossible to make a decent feature film on a very touchy topic.

The film is about the black market baby adoption racket where reporter Glenn Ford (1916-2006) writes a story that there is one. Which brings out all the charities that deal with adoptions, the good and bad who succeed in getting Ford fired. Ford does not give up and starts his own investigation with the help of some concerned friends, including a few he makes along the way. Rochelle Hudson (1916-1972) is wonderful as the mother.

The Code had every one of the women in the home in question either a widow or one who was married, but the husband split, everything but actual unwed mothers. That had to be because the Code would not have an unwed mother shown to be of good character. Of course abortion was not even hinted at, but you can bet that the villain of the piece would have been doing that as well as he was making money every which way in his home for pregnant women. 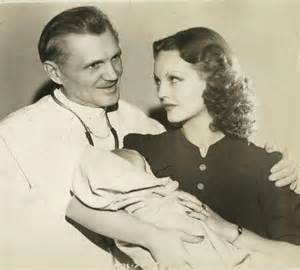 The best thing this film has going for it is the portrayal of Miles Mander (1888-1946) and his nurse Ratched assistant Georgia Caine (1876-1964) as the ones who run the adoption racket from the home for pregnant women they run. Mander is one elegant slimeball, he charges the women a fee to give up their kids when they enter, keeps them as slaves practically while there, collects on the other end from prospective adoptive parents. I don't doubt he would have done illegal abortions without too much care for the life of the mothers and in 1940 abortion was strictly illegal.

Two things unravel his racket. The first is when he passes off what is described and you have to read between the lines as Down's Syndrome kid to John Qualen (1899-1987) and his wife. When Qualen watches his wife jump in front of a subway train with the kid it was the most shocking moment of the film. He points Ford in the direction of Mander.

The second is when Mander has a rush order for a baby from a really wealthy couple and steals Rochelle Hudson's baby just born and fakes an adoption without her consent and tells her the baby died. As I said that oily British charm is played against type much like when he played Giles Conover in one of the Sherlock Holmes film series.

Ford and Hudson were a pair of attractive and winning leads. But Mander owns what could have been a far better film had the Code allowed for more frankness... 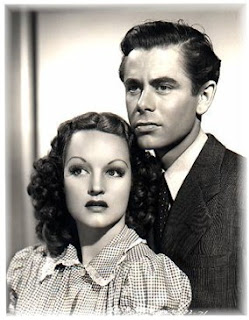