THE KIDNAPPING OF FRANK SINATRA JR. 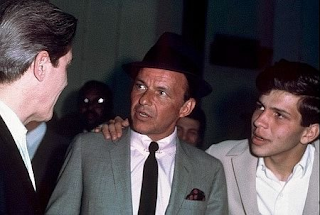 Barry Keenan, Johnny Irwin, and Joe Amsler were soon captured, prosecuted, convicted, and sentenced to long prison terms for kidnapping, of which they served only small portions (mastermind Keenan was later adjudged to have been legally insane at the time of the crime and hence not legally responsible for his actions). Famed attorney Gladys Root represented one of the three men. Frank Sinatra Jr was not the first celebrity kid the kidnappers thought of. Barry Keenan, the young mastermind behind the scheme, had also considered abducting the sons of Bob Hope and Bing Crosby. He decided not to because of Hope and Crosby's work for the soldiers during World War II, and he and his partners decided upon Frank Sinatra Jr, because they thought he would be tough enough to handle the stress of a kidnapping. 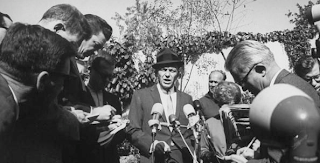 Although the crime was originally scheduled for November, President Kennedy's assassination delayed their plan. A rumor at the time was that Frank Sr. arranged this in an attempt to gain publicity for his son's fledgling singing career—a rumor believed to have inspired the plot for the Hawaii Five-O episode "Tiger by the Tail"-but was proven to be false. The kidnappers demanded communication via payphone. During one conversation, Frank Sr. ran out of money and was disconnected. Fearing never seeing his son again, Frank Sr. decided to carry a roll of dimes with him at all times (payphones at this time cost 10 cents). This tradition lasted the rest of his life.

At the time of the kidnapping, Frank Sr. and the Rat Pack were filming Robin and the 7 Hoods. The stress of the kidnapping, in addition to the assassination of Sinatra's close friend John F. Kennedy just a few days previous, caused him to seriously consider shutting down production completely, although the film was ultimately completed. 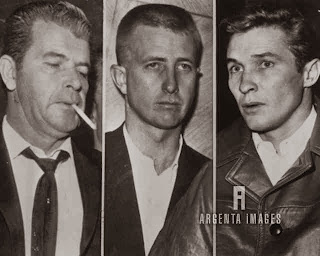 As for the fate of the kidnappers, after getting out of prison Joe Amsler worked as a stunt double and bodyguard for Ryan O'Neal in such movies as The Thief Who Came to Dinner and What's Up, Doc?. Amsler died of liver disease in 2006 at the age of 65. Barry Keenan Keenan was sentenced to life plus seventy-five years in prison for his crimes, but only served four and a half years before he was released, because it was determined that he was legally insane at the time of the crime. After his release, Keenan went on to become successful as a real estate developer. He is currently writing a book about the affair, with all proceeds going to charity, due for publication in 2014. A third kidnapper, John Irwin, who was the ex boyfriend of Barry Keenan. It is not known what became of Irwin after he was released.

As for the victim Frank Sinatra Jr, his career was never the same again. He conducted for his father for the next 30 years, and only in recent years has his reputation as an individual talent has been recognized. It is sad because it was bad enough that the young Sinatra had to live in the shadow of a mega star father, he also had to deal with the embarrassment and bad publicity of being kidnapped... 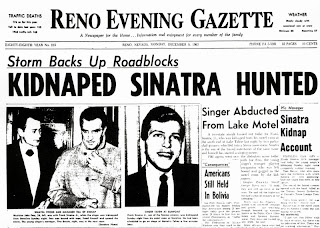